Reaper Miniatures forumites hold paint exchanges and paint excuse challenges frequently.  A new one caught my fancy because I like the concept of using non-fantasy miniature related stuff to inspire what I create with the miniatures I have.

Girot created the Randomness Painting Contest of painting a miniature based on a Song.  Read about it on the forum.  The idea prompted me to review what I have handy on my phone.

Song Choice and a Mini or Two

” by Jars Of Clay

I listened to it for about an hour straight, read the lyrics and started writing notes about which miniatures I had and what subject of the diorama might be.   I pulled one mini in particular as it already looks like he’s battling the waves of the ocean.  89013: Ezren, Iconic Wizard from Reaper.

But as the subject of this song, Ezren’s calling for help.  *insert Ghostbuster joke*  And afloat in the ocean after raining for days, what can he possibly summon to save him … well since it’s a Reaper-based contest (you can do non-Reaper if you really wanted to) and I really wanted the mini anyway … I chose the Dark Maiden.  She’s the figurehead and part of the bow itself represented as an angel of the deep.

I am a planner.  I will diagram and measure; test and retest.  So it wasn’t long before I had used the pictures from Reaper’s site to create a viable layout for this effort. 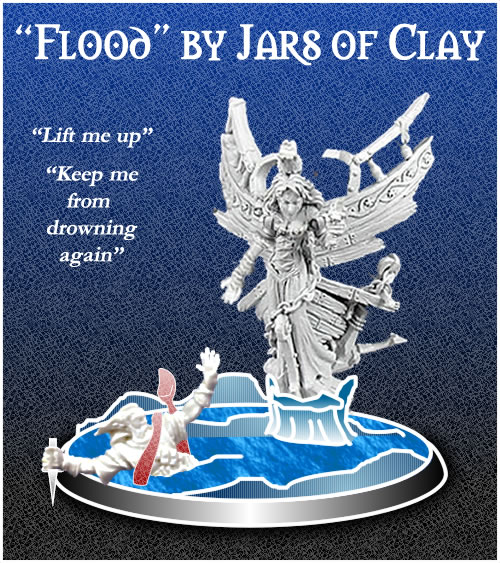 Waves, the rising angel of the deep and the unfortunate Ezren struggling to avoid becoming one of the Drown’d Souls.  A bit of conversion (hand swaps, weapon swap, arm repositions) and sculpting (waves, tentacles, bits and pieces as needed) and voila completed mini. Right.

So I ordered the Dark Maiden (and other stuff, naturally) and then after considering the range of stuff I have for basing I came up with this initial test.

Yes, that’s wood they are sitting on or stuck to for the moment.  It’s a round cut from a tree burl and sold from a nice woodworking lady in Ithaca, NY during their Farmers Market each weekend over the summer.  I got some nice stuff … see my post earlier.

The wood is setup almost exactly like rolling, rough waves.  A few added sculpey waves bolstered by greenstuff or magic sculpt and I think it will be perfect.  Originally I had considered making this a much smaller base so I could actually use it as the Dark Maiden or similar creature for gaming.  But now I am more interested in it as a vignette for the shelf.

More to come.  Please take a moment and consider where I am going with this and toss me a life preserver or two in the way of pointers.  I am going to do a search of the Interwebs this weekend for sculpting water and waves.  The look and feel of the Dark Maiden’s base by Derek above is pretty solid and kind of in the ballpark of where I want to get to.  Just a bit bigger in waves.