After watching videos and researching over the weekend, I decided to try out a Water Effect for this vignette.  A Water Effect is a gel-based medium placed on the surface of a model or they can hang after drying separately as waterfalls and the like.  The guys on Reaper had some links of interest that I hadn’t seen in my research and one is about as close to my project as you can get.

Coloured Dust is a blog by a group of people interested in painting and modelling miniatures.  The linked article is about applying a water effect around the prow of a submerged Viking longboat.  It’s quite an impressive layout and well treated.

With all of the research and the specific blog post from Coloured Dust properly digested and fairly well understood, I decided to buy a product and give it a whirl.  Instead of the Realistic Water stuff I decided to buy the Heavy Gel from Golden and picked some up at Michael’s for 40% off … yay, weekly coupons.

First I painted my test base with some blues and sand colors.  I kept it rough because I really want to see how much the gel obscures the stuff below it. 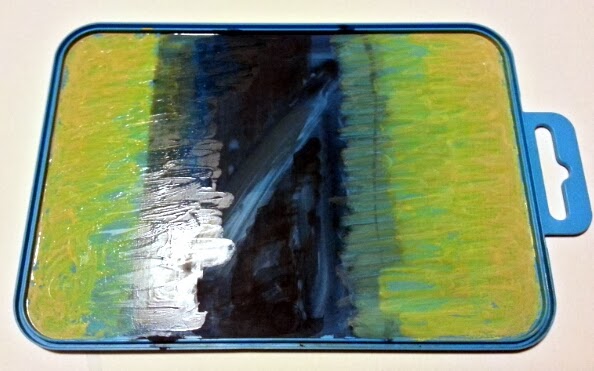 Then after that was set, I added the water effect using the Heavy Gel.  I used the popsicle stick method used by Michael Tiskus at TerranScapes.com.  You can see that the swooshes applied leave “waves” or swells in locations and low points in others.  I tried also to leave some peaks to see how they settle as it dries. 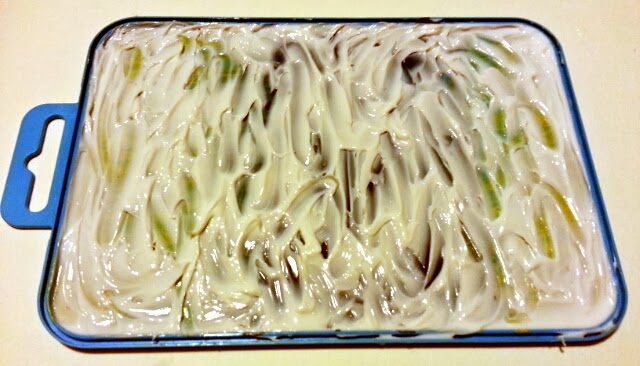 I placed the whole thing in a cupboard so the cats and dog wouldn’t shed on it.  Yes, this is a true concern as my dog, Mo, will just stop wherever and shake himself out throwing his winter shedding EVERYWHERE!  I checked it last night before bed and it was fairly clear.  Unfortunately, I had no power left on my phone and my cold was kicking my ass so I went to bed. 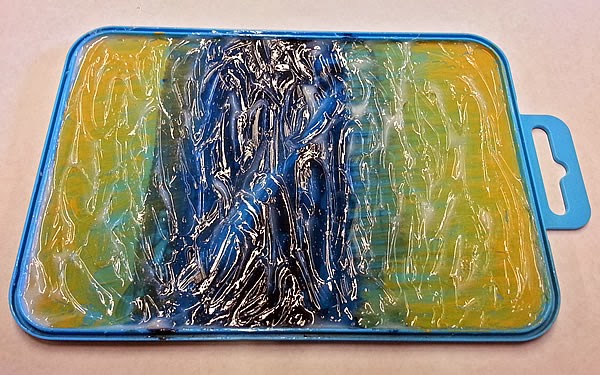 This morning I plucked it out and brought it to work and took the above photo around 9:15. Since I added the water effect around 7:15 last night that’s 14 hours of drying time.  You can still see some white in the water effect so I expect that by the end of the day it will be dry.  I might give it a bit longer to ensure a level of hardness before moving on to the next steps in my testing.

All of which should be interesting and informative for future projects.

And, as you can somewhat see, there’s plenty of detail under the water effect from the paint though it does obscure some of it.

Check out the first post for the WIP to see what this testing is all leading to.