The work was set aside to finish Hulkbuster as well as the Hellborn Paladin for the Reaper Forums Winter Exchange.
However I have put some work into this piece.  I had reviewed this project a bit with Cash (The Wiley Brush blog) at Paint Day and finished fixing some bits on Ezren this last week.
First, while his wind-whipped hair is appropriate for the wind-whipped scene, parts of his hair were more “dry wind-whipped” as opposed to “wet wind-whipped” so I removed a chunk of his hair that goes in the wrong direction from the back of his head and smoothed it all out.  I also removed a large mold line I missed during prep.
Then I snapped his arm back off from putting to much pressure on him from fixing his head.  Fixed that.
My initial paint work on his head was removed during surgery so I cleaned it up and re-applied a base coat.  Which was cool as I realized that I needed to mute the hell out of everything on Ezren to simulate his dunking and the darkened scene.
Here’s his initial base coating:

I finished base coating the various parts and started some layering. 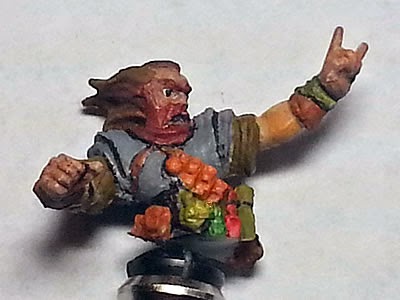 I also did some color tests on the wings of the Dark Maiden to see what level of water worn wood effect I wanted to get.  Sadly, I didn’t take a picture.
Previously I had base coated both her and her wings in Walnut Brown.  A mix of Oiled Leather with some Leaf Green got the desaturated brown I was looking for but I am unsure if I like it.  So I redid one half with some Weathered Blue added and that gave it a more “night” look.  So I might do something with both delineating a lightning strike from behind her to the right.  More saturated colors to that side and more desaturated and “night” shading to the opposite.
If I do that I will have to add similar lighting to Ezren.
The Dark Maiden got some more coats as well.  First I put an overcoat of blue for her dress.  I muted the blue with Walnut Brown. 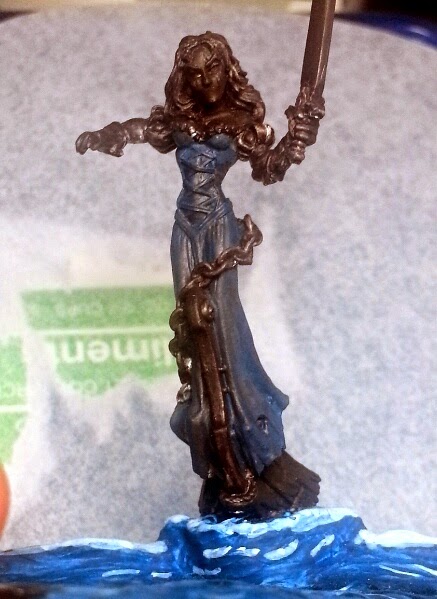 The wings got a dark glazing making the previous layer more desaturated as well as looking more like water logged wood. 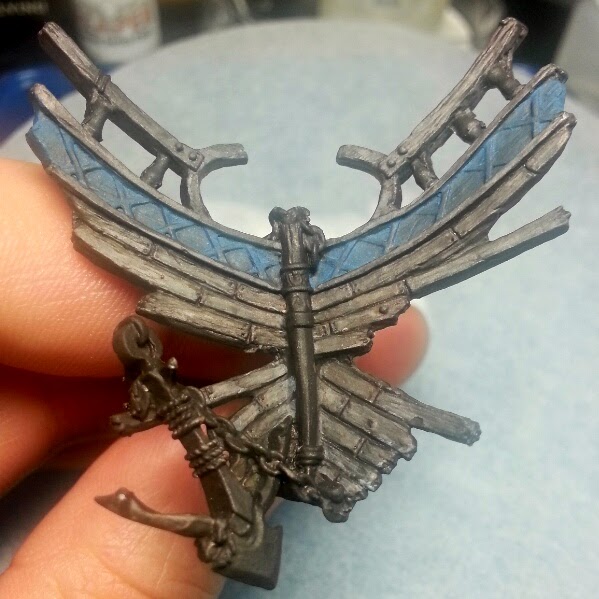 Overall I think that will make for a much more interesting and dramatic piece.
More to come … check out the older WIP posts: