+Anne at O’Leary Miniatures shared a link to Laughing Ferret’s blog which seems to be centered around Warhammer Army building and Blood Bowl teams.  Two things I am not specifically interested in but it’s always cool to see how people build them and put together various monsters, men and machines to field an army or a team.  (Like a Minion Army from Despicable Me)

One of Laughing Ferret’s regular series of posts is centered around a Goblin army and a particular post caught my eye… Brokentooth’s Guide to Goblin Greatness: Gotta Getta Giant!

The telling of the story is interesting in the sense that the goblins have decided that their army needs some giants but what kind of giants.

Laughing Ferret then goes into why goblins wouldn’t choose actual man-like giants but in fact would more likely choose a Gubenderf, represented by Crocodile Games’ “Wargods of Olympus: Titan Master I” and The Jibberwog, represented by Reaper’s “Jabberwocky.”

Here’s his assembled pair of “Giants”: 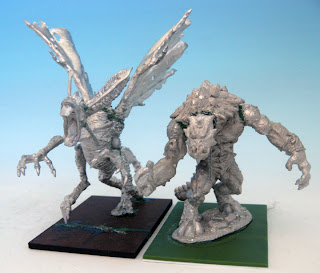 Ferret’s goblin conversation and subsequent reasoning behind the picks of the two goblin “giants” reminds me that in our home-grown, non-boxed RPG campaigns the races that exist don’t have to follow the source books for the game.  I typically run D&D stuff and set most of it in my custom campaign world, Markshire.  While I use many of the “normal” races from the D&D Monster Manual for many of the dangerous places, I can get behind the idea that those tribes might use more unique or different monsters as their guardians or consider them part of their “family.”

In my old campaign, the Frost Giants used Dragonnels as mounts.  These very non-dragon winged lizards were large enough to barely carry their rider but they served as a reminder that the frozen wastes of the Timeless Desert weren’t always about what walked out of the sands.

Thinking outside the norm from what’s labeled in the books provided by your game system can be the key to keeping your campaign a bit more interesting.

The Laughing Ferret Lab is having a give away.  Check it out:  Step Right Up! The Cure For What Ails You For The Low Cost Of Free! Give-A-Way Starts!