The Hunt for Color

I spent some time working on colors for Hulk and Juggernaut.

The colors I used originally for the upper half of the big guys were both mixes and while I did note the mix, I have since lost the colors.  So I spent some time making a chart from colors I own that might be close to what I mixed.

I painted squares with the wrought iron black priming.  Then I painted each of the seven colors I picked over the squares until I got a solid color over black. 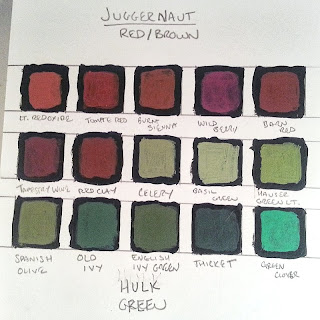 The Juggernaut mix I made is a match or close enough to Tapestry Wine.

Unfortunately, I didn’t find the Hulk’s color yet.  More when I get more colors sampled.

I’ve always intended to base all of the big guys with similar bases.  Talk of placing crates on them and what not made me think it would be easier to cut The Thing from his integral base and move him to one I don’t have to create.

I bought some resin 40mm square wood plank bases from FRP Games a while back and for some reason never considered them.  So I cut Thing free from the slug base and then cut his integral base from his feet.  And then pinned him to the resin base.

Here’s he is with some Walnut Brown basecoating on the base: 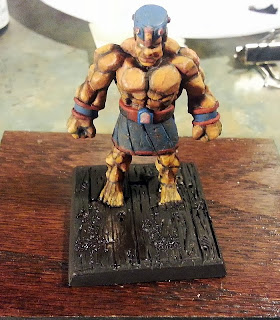