I originally decided to make this a surprise for the Finger Lakes Paint Day crew but I really, really wanted to make a WIP for this so … here. we. go!

I’ve enjoyed making all of the various Reaper Bones Stone Golems I’ve collected since the release of their first Kickstarter and one day may buy more to add to the collections.  Who knows which of the Marvel characters will be made next, Galactus/Sentinel (purple/blue) or Captain America (blue/red) but we can cross one of the previously voted upon characters off the list.

I present to you my design for the special edition, Marvel Team-up “Golem”: 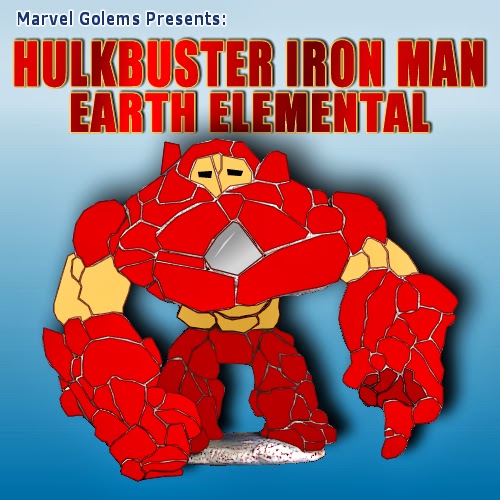 As you can see I took the Earth Elemental from Reaper Bones and have planned some modifications to him.  Here’s the original:

I had the epiphany for this idea when I first looked over the unassembled miniature.  If you look at the head in the picture above you can see that the neck (above where the head is) forms a nice diamond shape.  So I decided to lose the original head and give him something closer to the Hulkbuster Iron Man suit’s head shape which amusingly looks like Juggernaut’s helmet.
I also wanted him to be pointing his arm at his opponent. The left arm (right side in the picture) was a prime candidate for this what with his hand open as if to use an Iron Man repulsor blast.  However I couldn’t get it to seat solidly without some significant modifications.  Amusingly, the right arm required one small cut for the “pin” to fit within the original hole and the arm pointing forward and the whole thing nestled quite well with the rest of the mini in its new position.
Enter the Green Stuff
Now for the rest of the mods.  First I filled a small gap on the right shoulder with a piece of the integral base and some green stuff.
Then on to the important part … adding a head to the top of the body and making it look like it belongs there.  So first it took a moment to fill the chest arc space and get the right shape to imply a gem stone or something.  Then roll out the head.  I started by placing the bulk of the helmet shape.  Then I added the faceplate piece.  I started with a simple flattened and round piece and then made the edges irregular.  A little more shaping and I added eye indentations.  Then I realized it would look better if the faceplate was more than one piece of stone. 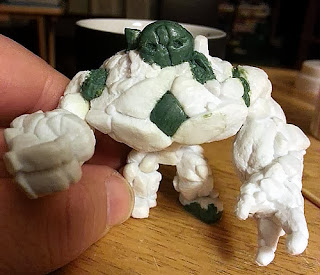 After playing with the faceplate for what seemed like forever I figured I had it looking like I wanted.  So I started adding some other details that would add to the overall look of Iron Man armor.   So I added a slightly offset but matching upright on the other side of his head.  Like neck bracing plates.
Then I added two hard point fins like I could add a missile rack to them or something behind his shoulders and then a bracing series of overlapping plates along his “spine” similar to what Igor had in the Iron Man 3 movie. 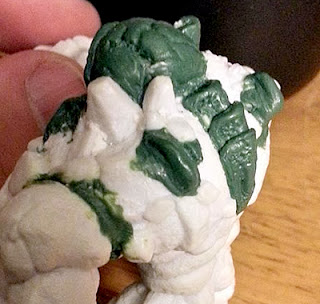 The photos depict relatively fresh green stuff and I will be using some files and such to add some starker edges once it’s completely cured later today.  The green stuff on his foot exists to give him a better footing with the base when I add him to it.  The two feet rest on the same plane now.
Painting Schema
As shown above the colors will likely layout like that.  The difference will be that some of the outcroppings will be variations on the base red color.  Another noticeable difference will be the black undercoating. Like the Stone Golems the Earth Elemental will get a glossy primer/undercoat of black.  The reason is relatively the same… the body is comprised of chunks of stone instead of sculpted like Stone Golems typically are.  So the black stuff is what’s holding the golems together.  The earth elemental is much the same.  So the angular stone faces will get some separation from each other with the paint job making him look much more different then other paint jobs on it.
More to come.  Check out the older WIPs and Show Offs:
Work In Progress Posts:
18 | 17 | 16 | 15 | 14 | 13 | 12 | 11 | 10 | 9 | 8 | 7 | 6 | 5 | 4 | 3 | 2 | 1
Show Offs: 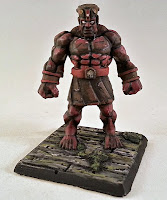 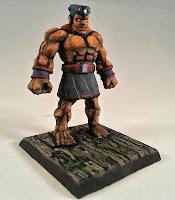 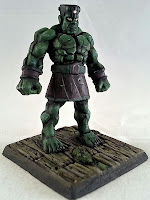 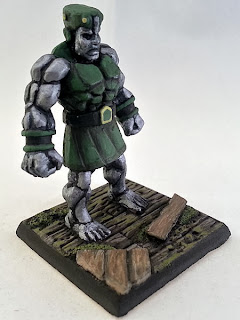 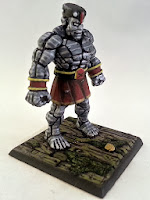