Spent some time on the new Myconid Cephalopod (MC) tonight.  Finally had a chance to bend some wire and make some tentacles.

I bent the wire in the middle to form a heavy pin of sorts and then flexed the ends to get the “pose” of the tentacles for MC.  Once I had what I was looking for and could seat the pin in the stem I sanded (added sand as opposed to removing metal) the wire for clay to adhere to

The sand is literally just super glue and play sand.  See post about finding the sand.  Since the wire is smooth the clay would never stay in place and it also bulks up the piece and shows me where I can place “elbows” or changes in tentacle size.  The tentacles will be shaped like a squids primary cephalopods and be wider at the end.

I don’t know if I will make suckers for the tentacle.  Seems a little over zealous for the sculpt but it really all boils down to details to make minis look cool.  So we’ll see.

The next step is to layer clay over the sand and get the general shape of the tentacles.  A final green stuff skin will go over that to provide better texture detail.  So after a little work, I had some tentacles.

The piece is missing support tentacles down the side of the outcropping or stem. The clay “neck” is just loosely wrapping the wire holding the cap up.  I’ll sculpt the support tentacles over the stem and then add sand to the stem to allow me to make it look more like rock.  Some scree and perhaps a victim will litter the base around our kung fu mushroom.

One of the things that might be incorrect with this design is how I built the tentacles here.  And it’s possible that I will rebuild them to correct this.

The anatomy of this monster is that the cap is the body of the monster; abdomen, torso and head all rolled into one mushroom cap shape.  The tentacles protrude from the cap downwards.  That said, it’s possible I could alter that anatomy to include a small stem from the cap which houses the tentacle connection to the cap.  I might have to make some sketches.

But for now, we’ll see where all this leads.

The last of my pics:

Update:  Made a sketch of the anatomy of the critter and I might have to restart my tentacles. 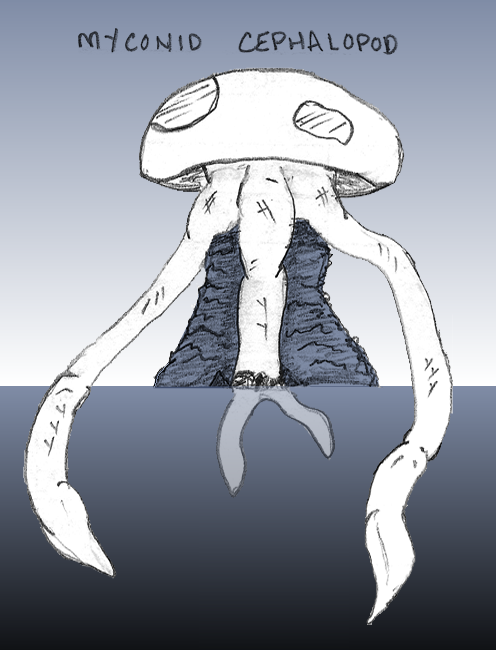 I like the flow better with the tentacles protruding from the top of “cap” and it worked well on my original piece.