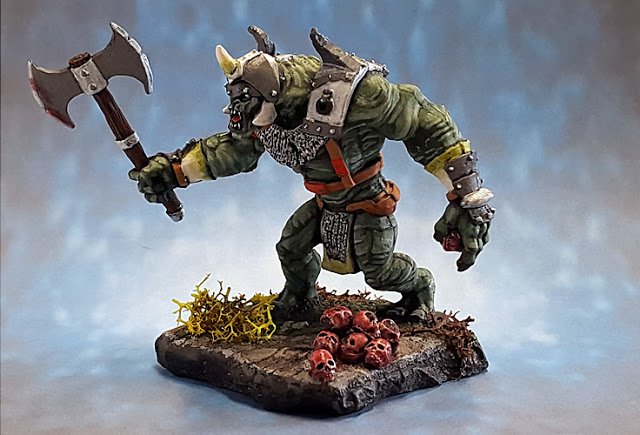 This Reaper Miniatures Mountain Troll, sculpted by Ben Siens, is inspired by the Abomination from Marvel Comics as seen in the early years of the Incredible Hulk.  The Abomination has an interesting overall look to his skin. It’s scaly and leathery, and naturally, green for a gamma irradiated monster.  The back muscles of the miniature immediately reminded me of the Abomination so I ran with it.  You can see for yourself how the artists drew and colored him…

As per usual, my buddy @Ub3r’s Ubsession complained that there weren’t enough SKULLZ on the last miniature I posted so this one’s all about the SKULLZ!  Using some loose skulls from Toad King Castings as well as a trio on a flat piece, I built a skull pile of freshly peeled human sized skulls.  I placed one in the corner for the one that rolled away a bit.  And in his hand, the Skull Collector has an ogre skull to add to his growing pile.

I used paints from Reaper Miniatures, mainly the Moss Triad as his skin tones, my recently acquired Army Painter Warpaints, some Scale 75 metallic paints for the armor and axe and a few Vallejo paints.  The troll is mounted on a piece of slate with his integral base merged with sand and ballast to bring the terrain level.  The bush and vines are both created from moss.  To see most everything done to him, check out his WIP.

He’s joining my Joten Horde for mashing the adventurers.