I've been thinking about this since I got back into a regular amount of miniature work. Specifically with regards to skin tone triads for various monstrous races. What do you choose for a creature with blue skin, like a Frost Giant? I know a lot of painters determine a middle or base color and then pick a shadow color and a highlight color. There are also those that mix their colors using the base color as a starting point.

The problem with determining which three colors to pull off your shelf or outright buy is the relative value of color for each.

Reaper Miniatures produces a paint triad for several common skin tones in their Master Series Paint line. These include groups called Suntanned, Bronzed, and Rosy as well as fantasy favorites like Dark Elf Skin and Vampiric Skin. They put together three colors that work well for that type of skin tone and make it easier for their customers to create the look they want.

But what about your non-standard player character races like Trolls, Giants, or even Minotaurs and Lizardfolk. I don’t want to use the same green triad I picked out for my Troll as I use for my Lizardfolk. What’s a good method for determining which three colors to pick from what is available out there?

For one, a lot of the fantasy paint companies produce groups of paint … like Scale Colour from Scale 75. Got an Orc or Goblin you want painted … no problem … buy the Orc and Goblin kit and everything you need is pre-determined. They even provide a guide to help you lay paint consistently.

But What About Monsters Not Covered by Hobby Paint Companies?

Let’s get back to my Frost Giant. Which colors best represent the Frost Giant in my gaming world?

I picked the above three colors from an already painted miniature using Adobe Color. I uploaded the photo to their website and picked the three spots that I felt best represented the three shades of the mini’s skin. See example image below and note that the image above is not the exact same as what I am finding on my own miniature but the swatches do come close to matching the colors I actually used on Frulla. 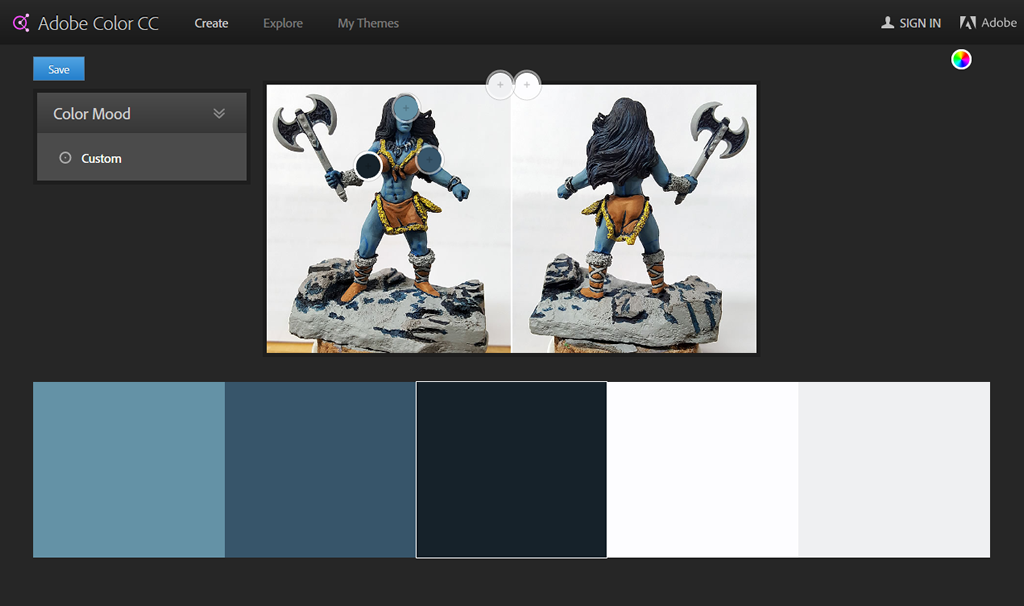 The only issue with this method; this is a screen color and we’re dealing with paint colors. However, this can get you in the ballpark of picking paint colors. Nearly every paint company provides on screen examples of their colors.

It’s time to pick your colors. Now, I don’t own every color from any one manufacturer … not for lack of trying. And that’s only because of the enormous expense of buying these little bottles of color. I imagine most people don’t either, but you can look for the on screen examples of what you do own.

At some point you have probably decided that you need to catalog every paint, miniature, brush, stamp, etc. you own. I’ve done it for most everything I own that is essentially a collection. I have over 200 craft paints, over 100 hobby paints, over 750 miniatures and nearly as many movies on DVD or Blu-ray. When out and about or contemplating an online order while at work, it’s hard to remember every single color you own. So, I recommend Pearltrees.com for their excellent cataloging program for Desktop or App. It’s the closest thing to my original favorite, SpringPad; now defunct. The other contender is Evernote. It’s worth checking out if you prefer a more spreadsheet methodology of maintaining your collection. I prefer a more visual approach.

Check out my own constantly growing Paints Owned catalog.

To recap the process and pieces of the procedure:

And ta-da, you have your skin tone triad.

Here are some examples of palettes I built with Adobe Color using some of my miniatures and exemplars from other painters.

And some more for other race types:

NOTE: I haven’t taken the time to match these colors to any particular brands and naturally your choices for exemplar might differ from mine.

Sound off on your Skin Tone Triad ideas in the comments below.