Long before I held my first fantasy miniature I was introduced to the Model Railroad hobby.  My father built a small set in our basement where I could stand up straight and he had to bend down a bit… I was twelve or thirteen.

The table and track was rather simply setup on a 4′ x 8′ board (most of the board, prolly not all of it) between a house support and pantry wall the former owners had used for canning way back when.  A simple transformer and track were installed on top of “grass” paper.  A hole was cut out for “future” water feature.

The hook for me was the Silver Streak HO Train Set I received for Christmas or birthday. 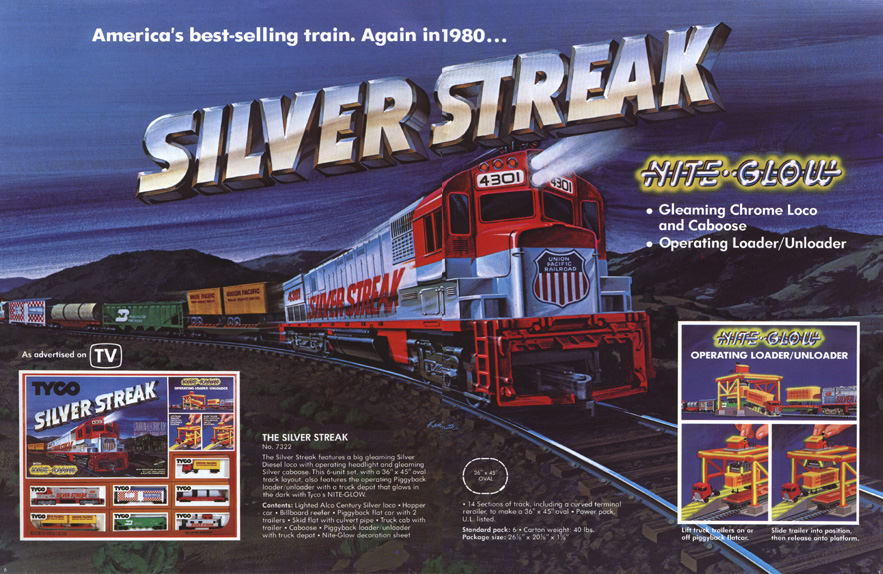 My father let me think it was from the movie, Silver Streak.  Yes, I knew of the movie, my mother has had HBO since it was launched.  Gene Wilder and Richard Pryor were awesome together.

So, we had the Silver Streak engine and cars with a basic loop track.  It ran on the floor of the house long before we put it on the basement setup.  A few trips to the hobby store netted me some basic pamphlets and a general understanding of track layout.

My grandfather, on my mother’s side, had participated in train builds in the past with various groups around our town including the basement of my middle school.  When my father and mother split, he helped me get farther down the hobby hole.

Later still, my high school buddy and I made use of his contractor father to build a different layout in his basement using a tunnel at one end and cardboard mining cars on spare train wheels so we could emulate the Indiana Jones, Temple of Doom scenes.

But all of that stuck with me over the years. I still have all of my model railroad stuff.  And the two engines I had sit on a display in the living room under a framed art print from the Steam Engine Museum in Scranton, PA.

The biggest thing I took from that hobby and started using almost immediately with my miniature hobby was ballast for basing.  Stupid simple but it was better than nothing.  Everything I did with this was from a model railroad scenery book I had snagged from a library sale.

Rocket 20+ years into the future and today I was in Geneva, NY (the closest city to my home town) for a doctor’s appointment and then my usual weekly physical therapy.  For the first time in months, my ortho-doctor’s appointment took all of 15 minutes from walk-in to walk-out.  WHAT?  I magically had an hour to kill in a town with a hobby shop.

I zipped down the “Hill” along the arterial to the entrance to Downtown, Geneva.  The hobby shop, Lake City Hobbies (www.lakecityhobbies.com), is on the first corner right off the arterial connection.  Our company handles their website so I was hoping to run into Wes, the owner.  No luck but it was nice … a whole 45 minutes to myself in a hobby store  They carry a variety of stuff to keep solvent … Disc Golf, Model Rockets, RC Cars, some board games, darts for the local leagues, comics as well as the Model Railroad stuff.

After my first walk through of the store, I was heading back to the beginning to start over when another customer came in.  They went straight to the model rockets.  I resumed my slow retrace of my steps to make sure I saw everything.  I always end up at the Scenic section and the tools.  I didn’t pull the trigger on scenery but I did get a new hobby saw with two blades.

I ALWAYS buy a new can of Testors Dullcote.  They need to make this in Gallon-sized with a spray nozzle on the end of a hose.  Yeah.

However, while the other customers picked up their first ever model rocket kit … the boy’s teacher had fired off a bunch in a tech class somewhere … so the family jumped on board this new hobby for their son … I perused the model railroad books.  I pulled out one in particular:

This reminded me of the older book I had from my youth.  By the time the two other customers had finished with their purchase, I was sold.  I’ve already read through the first two chapters this evening.  Looking forward to applying these to my next piece … cardboard strip frames with plaster cloth.  Rock faces from molds mixed in for a great cliff-face scene perhaps.

Hell, I bet I will apply something to my current piece:

So, with some purloined time I managed to find a new Tome of Knowledge for Thrym’s Table. Post a comment to remind me to let you know how useful the book is.

Get out there and see what’s in your Friendly Local Hobby Store and apply it to your craft.