Okay, prototype number one completed.  Time for another.

So after reviewing the previous thread other ideas I decided I really want to make the keep.

I found the six-inch cork round and roughed in the water and then cut away the cork where I had drawn water in the picture.  Then after finding an appropriately sized tube to create the tower, I transferred the shape of the tower sticking out of the water using a stencil I made from the drawing.

Then I outlined the cut tube on to the cork and cut away the inside edge to seat the tower piece.

I fit some cork pieces I cut from a sheet I have used.  I roughly matched my drawing.  Then after making sure I had them where I wanted them I pin them down and trace them.  Then applied super glue between layers.

Here’s the start of it compared to the drawing … 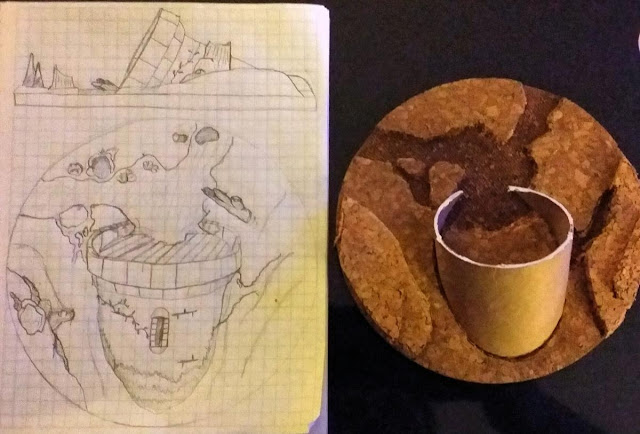 The cork elevations are just super glued at the moment.  But once I shape the slopes of them I will seal the cork with glue. 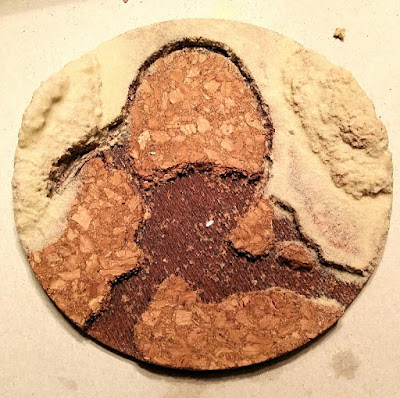 I sat over a box top and scraped the corners down with a sculpting tool.  I made sure to rough up everything.

To make the transitions smoother I added sand to the surface.

After adding yet more sand to the cork make the terrain more uneven and textured I gave it all a wash of brown. 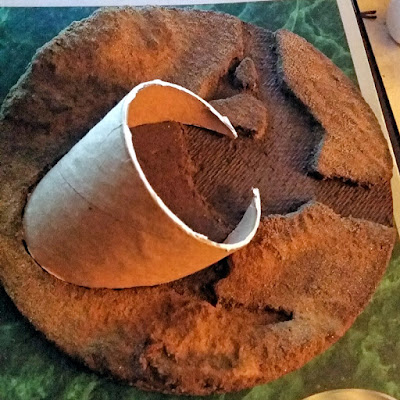 It muddies the details a bit … pun intended … but the end result is a nice transition of the three levels of cork on either side.

Those will get broken up by a few tree stumps.  A couple are just rotted out husks of tree stumps,

The Parapet or Battlements of the Keep 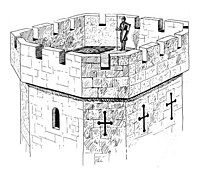 Considering that the tower itself is not very wide at 2.625 inches across … which is 12 feet and roughly the equivalent of a small living room or bedroom … I wasn’t sure what I would use to make the parapet of the keep.  My original idea was to just use a Pringles tube which is slightly wider than the tube I used for the tower.  I would build the buttresses connecting the two tubes with some wide toothpick-forks (great for appetizers) and fill in with green stuff or Sculpey.

However, I remembered that the office had a bunch of coffee lids for our cups supplied by our Water/Coffee delivery service.  So I checked one of them out this morning.

The inside ring of the lid matches the tower and the overall size seems perfect. 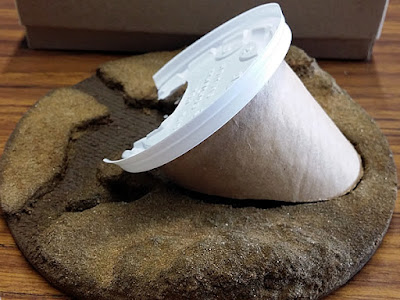 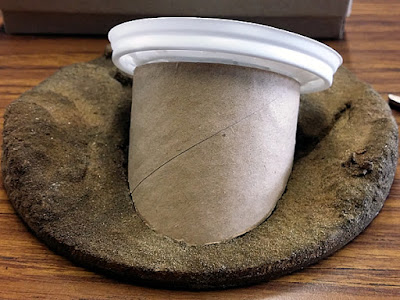 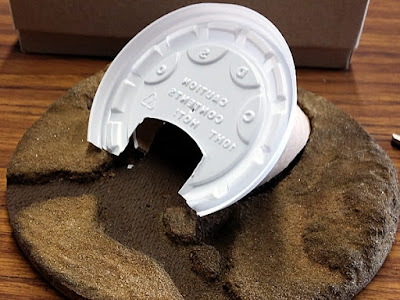 The cut and placement is a dry fit and the lid is only loosely taped to the tower.

But I think it’s a damned decent match.

The buttress will still be a combo of green stuff and wooden toothpick/popsicle sticks.  And with the outer layer of stone to be added to the tower still … I think it will be perfect.