Been a while, so back to it.  Been focusing on the business and my wood miniature base line, +WoldStand, at http://markshirestudios.com, and not so much on the hobby.  Today I am combining the two a bit.  The following is a custom order for my buddy, Ub3r N3rd, for a Black Walnut Bark Display Base.  Or as I’ve taken to calling it, the Treant Mitt. 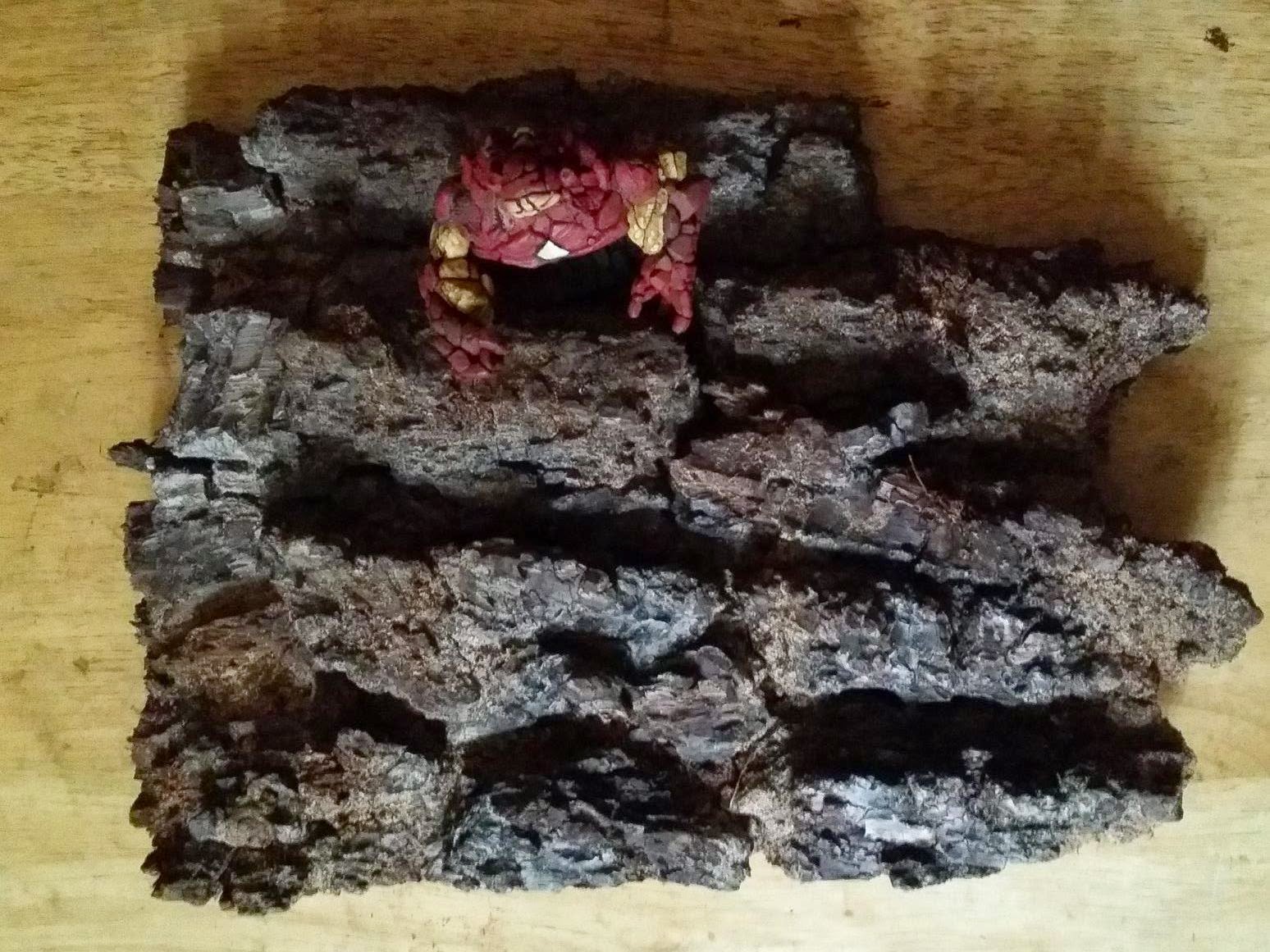 The above piece is from a felled Black Walnut from a local farmer who was carving off the bark to use the wood for his own project.  Standing atop the piece is my Hulkbuster Large Earth Elemental from the Marvel Golems project.  The mitt is 13 inches long to the tip of the bark and 10 inches wide.  It stands about 2-3″ from table to the top of the bark.  So it’s a big piece of bark and wood.

The mitt underwent intense cleaning Sunday, during Football watching.  I had to remove the collected sawdust and loose bits of bark.  I cut off some spots where the saw didn’t cut through the wood cleanly.  What little that remains on the underside.

One of the things about working with bark is that the connections between ridges as large as you see in this piece are tenuous and come loose.  The piece at the bottom right of the picture above came loose mid-cleaning. 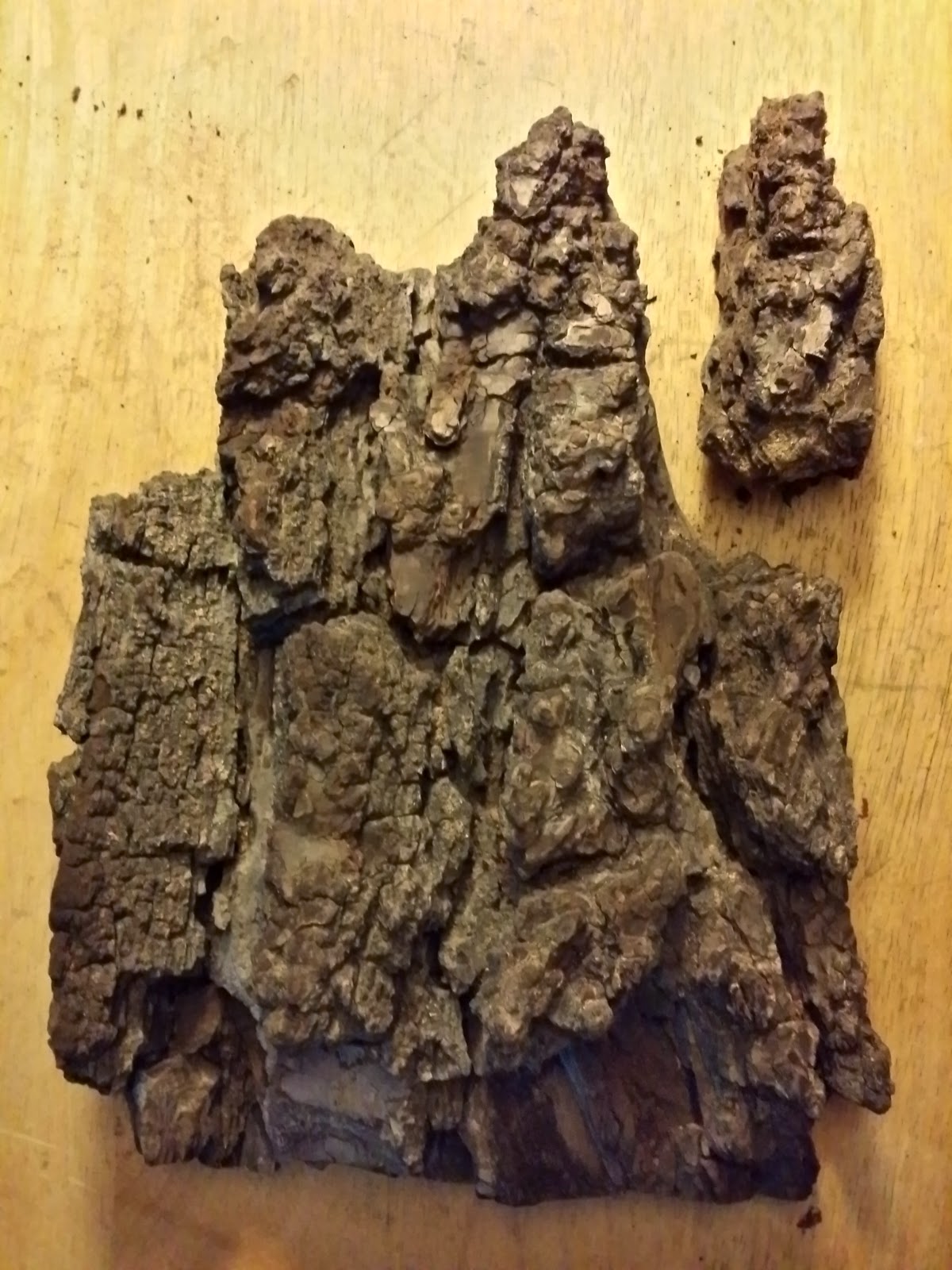 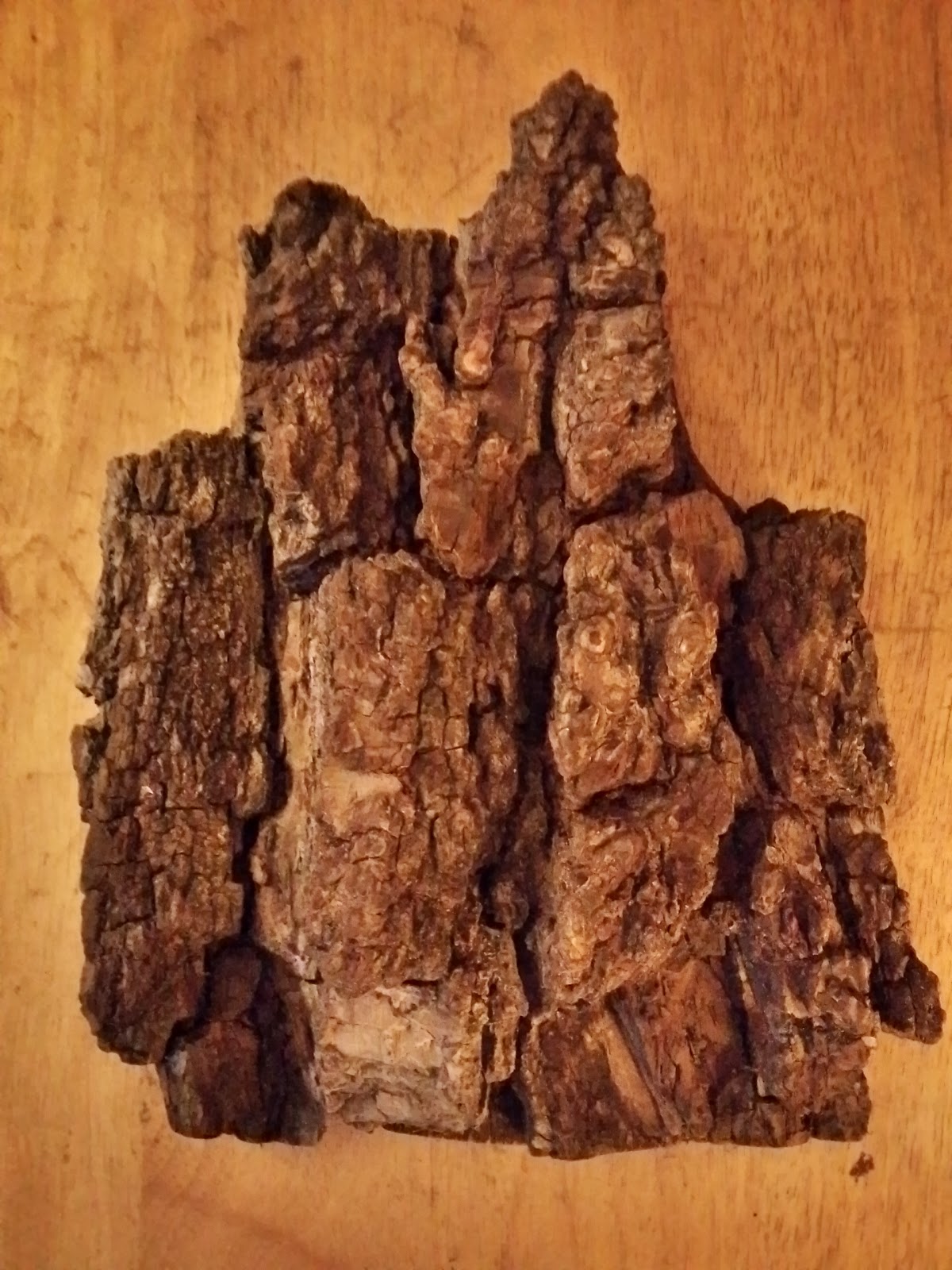 As you can see, the mitt lost a finger, but Ub3r now has another base for a dragon or monster so there’s that.  The reverse side then underwent sanding with my good ol’ Black & Decker iron-shaped cordless sander.  I smoothed out the blade ridges from the band saw and transitioned the wood to the bark a bit more dramatically. 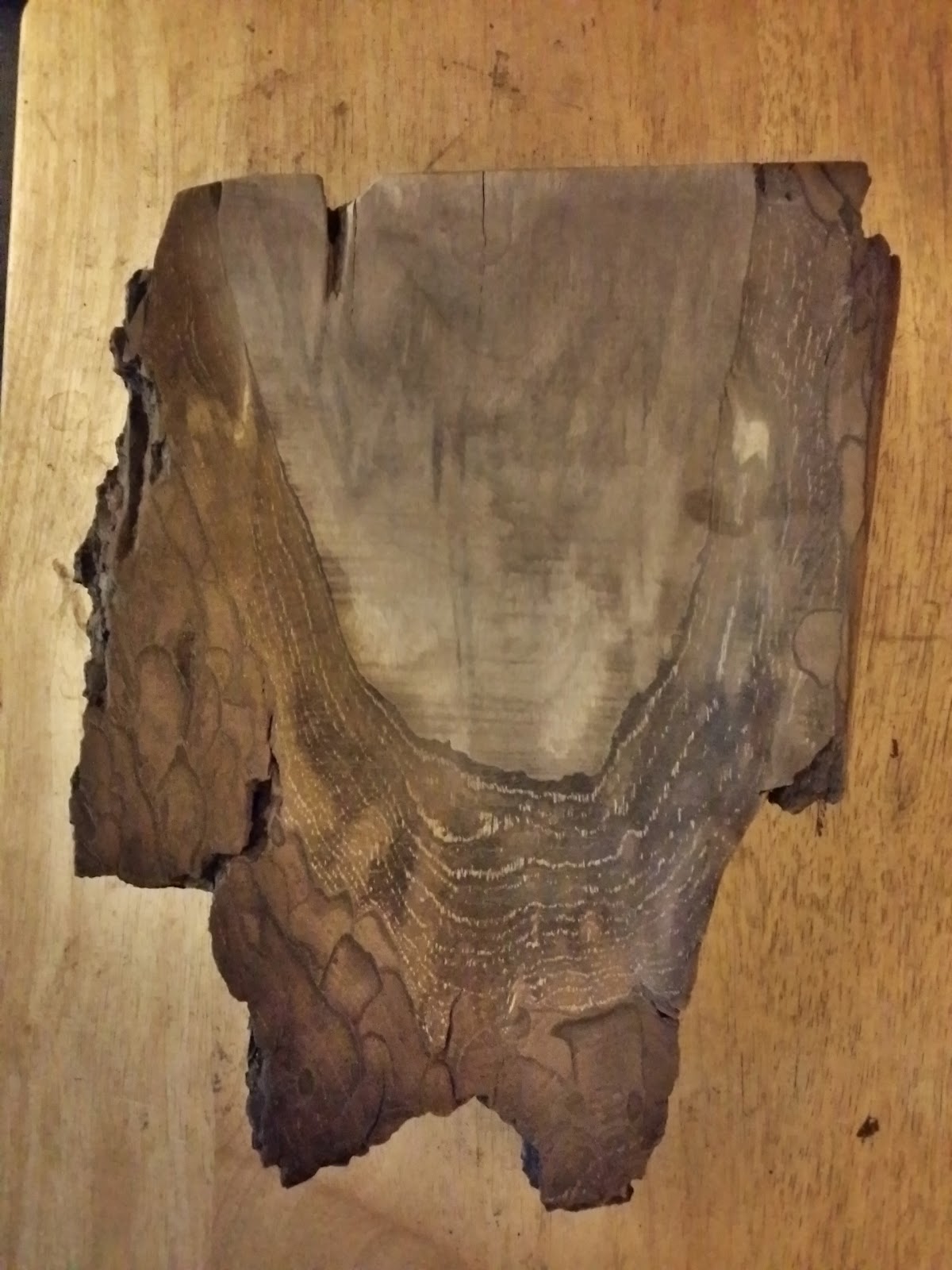 Black Walnut doesn’t really look like much until you finish it.  But it does look awesome once you get a coat of Tung Oil Finish on it.  Especially when the coat is still wet. 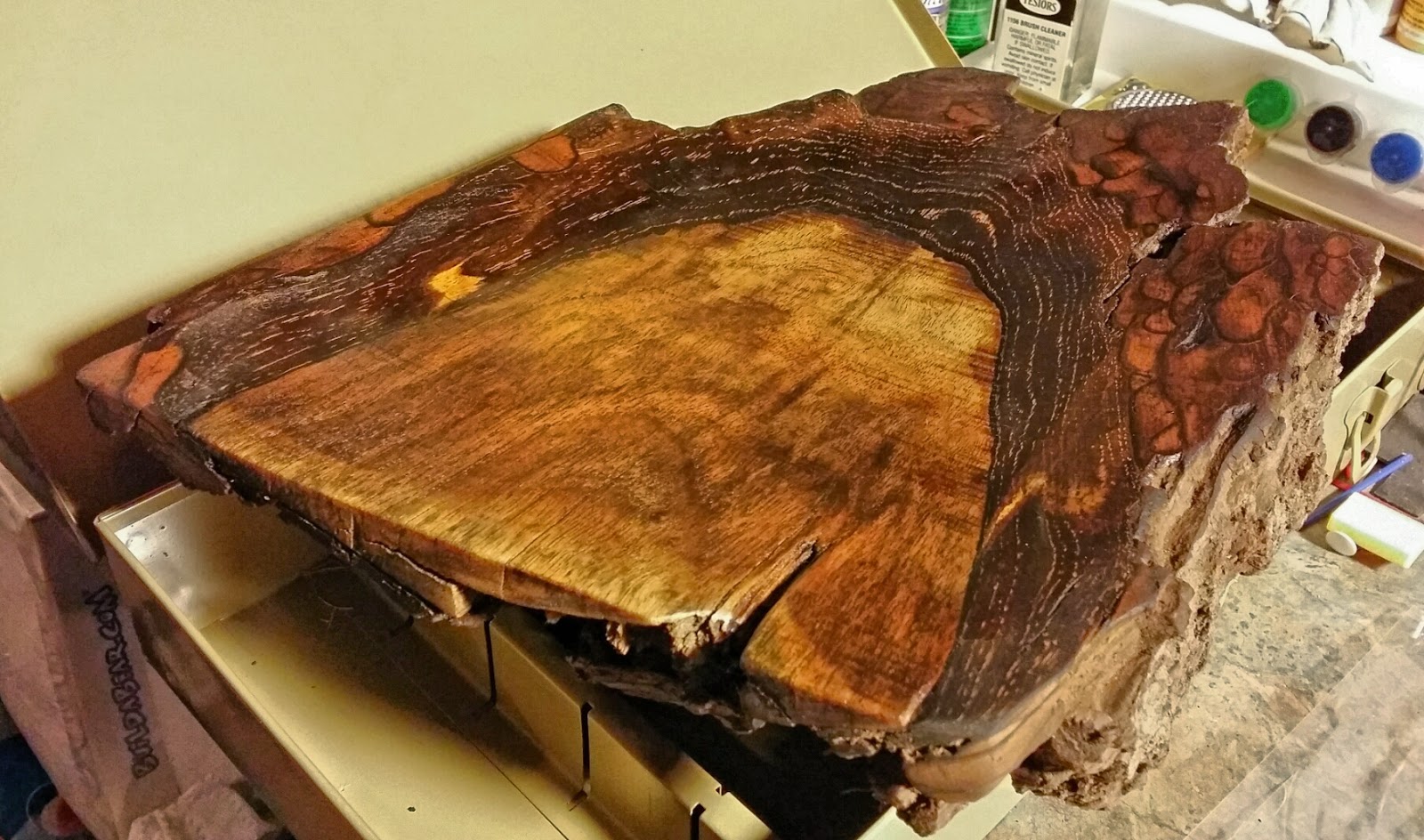 You can see a little simulated wear-n-tear on the edge of the wood and in the cup near the tip of the wood where it meets the bark.  The ridge lines from the levels of the bark pop out and the whorls in the bark near the edges are amazing.  So many features in one piece.  Shown is the first coat, still a little wet as I mentioned.  Tonight it will get a light sanding to smooth out the previous coat and then a second.  When that is mostly dry, the bark will get it’s first coat.

The channels will get a goodly amount of Tung Oil first.  I use a dropper to run it into the channels well.  Then a cloth to clear the drips and such.  Then it’ll be just rag wiping the rest of the surfaces of the bark.  Heavy for the first coat and then wipe away with an alternate rag.

I expect to be finished with the whole thing by tomorrow night or so.  Once it’s completely dry, I’ll bag it and ship it out.  Can’t wait to see what he does with it.

We discussed which side to use and I even shot a demo of using the wood side up kind of like a beach with a monster near the lip and the adventurers near the bark edges. 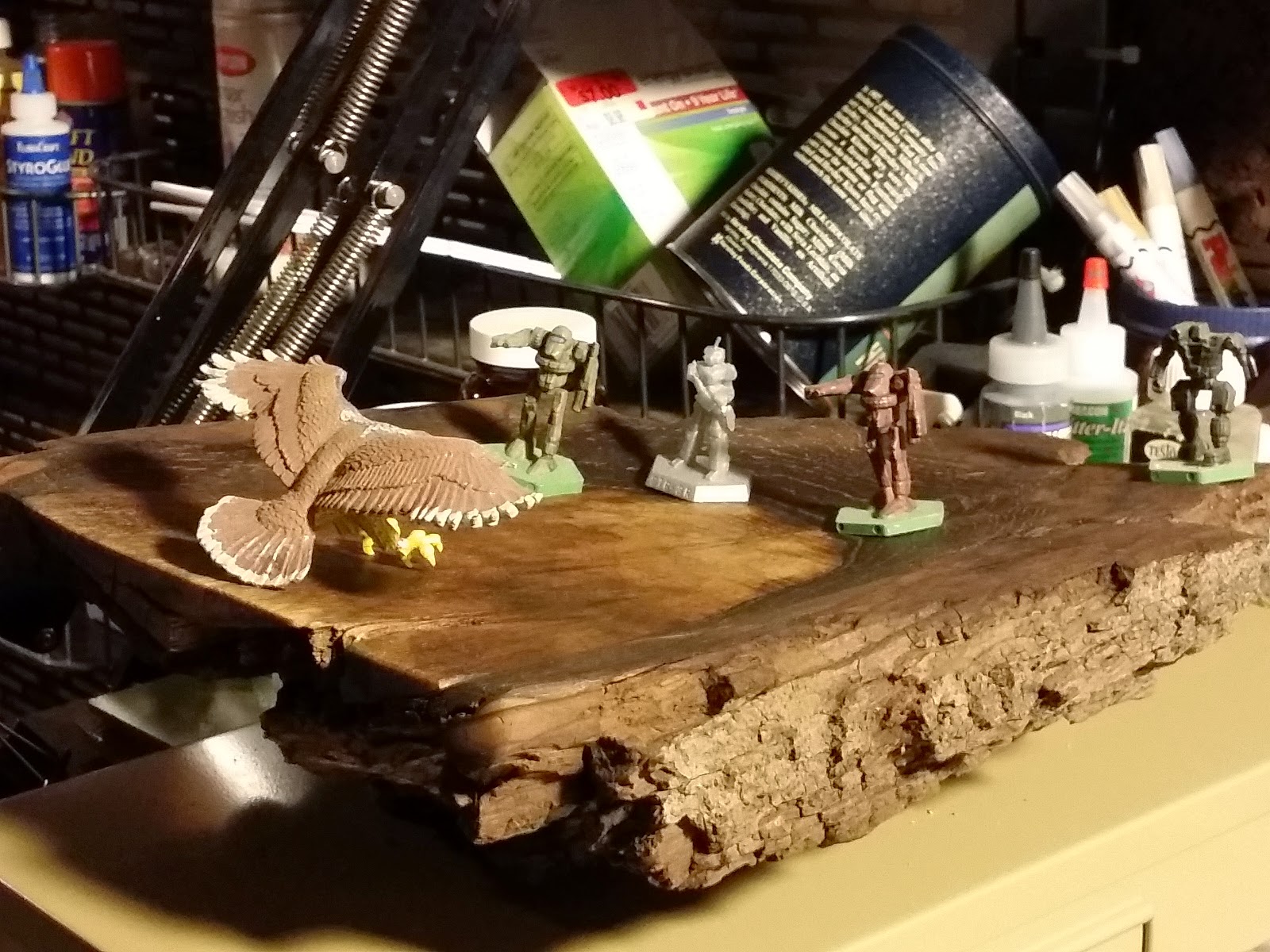 Don’t worry, it was dry enough to place the minis on it.  And those were just some pieces lying about on the bench or nearby.  I use the plastic mechs to come up with combat scenarios for Battletech when I am waiting for stuff to set/dry, so they were handy.  The bird attaches to a rock base at the back right of his hind feathers and I’ve been trying to work out how to get him more stable, so he was handy as well.

More photos and an update before I ship it out.  And hopefully some finished shots of the diorama when Ub3r gets done with his stuff.

If you want to place a custom order or check out other finished bark pieces, visit the store: http://markshirestudios.com.