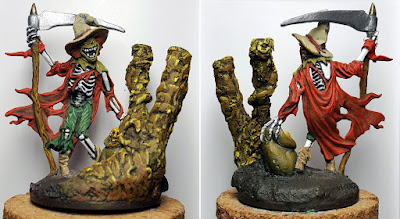 To continue the work on Harrow, I started off by lining the scarecrow with Reaper Grey Liner.  I basecoated the tree with Reaper Rattlesnake Leather (promo color) and then edged the bark with Reaper Palomino Gold.

His hat is Reaper Terran Khaki.  His face is Vallejo Yellow Green and his eyes are Reaper Palomino Gold. 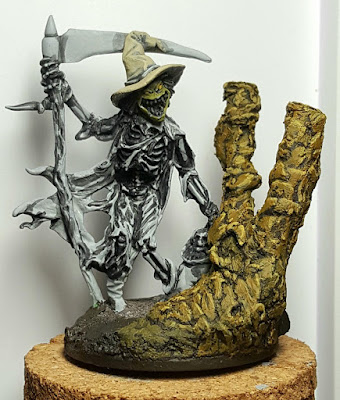 I was unsure what colors I would make the rest of his clothing so I left him for another night to consider it and possibly get started on his bones, etc.  However, the next day, I decided on the following: 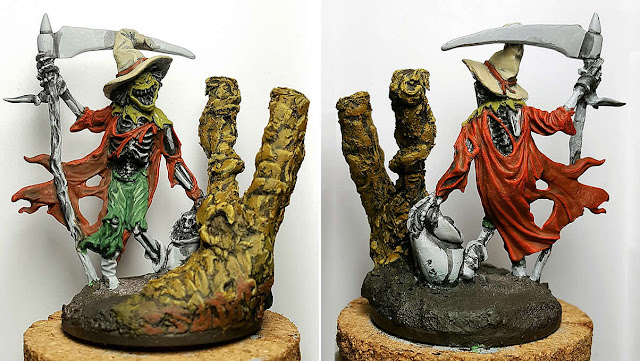 Amusingly, the two reds are considerable different ends of the saturation spectrum.  Once I got the Rach Red on as the highlight, I decided to push it brighter to give the coat an almost glowing effect.  The interior of his jacket got a wash of Reaper Umber Brown to darken it up some and bring it closer to brown.

The staff of the scythe is the same Rattlesnake Leather over the Reaper Grey Primer and Reaper Grey Liner and then washed with some Reaper Umber Brown to give the wood a nice variation of colors.

Gauntfield’s boots are the Reaper Terran Khaki with a wash of the Reaper Umber Brown .

His hair is an interesting combination of Reaper Cactus Flower (promo color) as a basecoat, darkened with Rattlesnake Leather wash and then some Reaper Rach Red for highlights.

The eyes got a dot of Vallejo Flat Yellow to brighten them further and his bones are the Vallejo Panzer Aces Stencil. 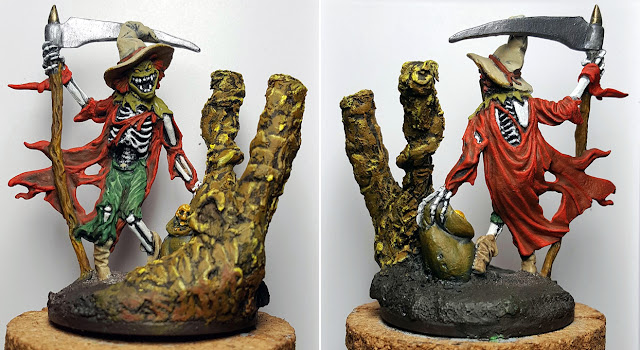 To carry the saturation style from Gauntfield to the rest of the piece, I added Vallejo Flat Yellow around the tree to push the eerie ~ creepy factor.

The last steps will be to add some more color to the ground and then spread and pile desaturated autumn leaves around the tree and his feet and scythe.