After a lengthy battle, I stood triumphant over the defeated form of my enemy … Procrastination!

I got into the details and clean up of the Ogre Mage from Reaper’s discontinued lead line, P-65 Heavy Metal.  You can still get the mini in in some locations that have older stock or you can get the white metal version.

The initial shots before a final round of details.  I used a background this time.

I glazed his hair with Reaper Grey Liner to let some of the original blue color through.

His eyes were cleaned up again … not my favorite thing to do and his teeth received a Reaper Rattlesnake Leather wash to yellow them a bit, then some Vallejo Panzer Aces Stencil to whiten them back up.

The pack cover got another wash of a purple, this time Reaper Malvernian Purple.

The weapon grip is pretty much just a straight wash of Reaper Rattlesnake Leather (promo color).  The two “pins” in the grip are Reaper Witchcraft Purple, as well as the pommel stone, the crossbar of the hilt, and the ring above the pommel butt.  The pommel butt is Reaper Rach Red.  Blade is Reaper Tarnished Steel for the edge of the blade, Reaper Templar Blue for the back of the blade with a seam of Reaper Midnight Blue separating the two.

Reaper Adonese Green was used to color one of his pouches (behind the Water Goblin on his back) and the ties to his bracer.

His necklace is Reaper Rach Red along with the various ring weights around his wrist and from his belt. 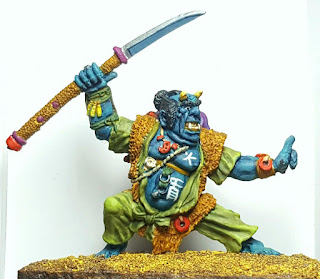 The last things I touched were to add a better color to the feathers hanging from his weapon hand, Reaper Pale Saffron, and to create a tattoo, Vallejo Panzer Aces Stencil, on his chest and belly.  They are a protection spell.  The belly tattoo is partially obscured by the rings hanging from the chest strap.

I am finished with the miniature itself, I will add some moss and a slate stone in front of the miniature’s base.  Perhaps some foliage around the stone in addition to the moss.

Stay tuned for the Show Off post. Want to see what came before this segment, review the  WIP :: Ogre Mage :: Reaper Miniatures P-65 Heavy Metal.