During the creation of Mr. Bones II from the now finished Bones II Kickstarter by Reaper Miniatures, I realized that I had the perfect base and pieces to recreate a scene from Mr. Bones’ stretch goal map.

So using the cemetery and mansion areas of the map, I have made a small display diorama for Mr. Bones II that I completed recently for Reaper Forums sponsored Halloween Contest.

Here’s the section of the map I am interested in recreating in some part:

So I installed a grave marker and a sign post on a piece of wood after laying out the game board path with unused tiles and cutting the end pieces to fit the wood. 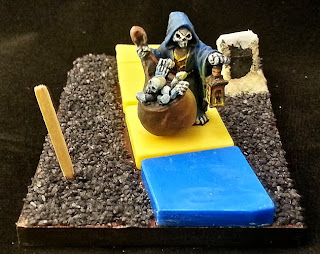 Then filled in the space on the surface of the diorama with “ground” and made the grave marker rough with some sand.

I then added in two cross style grave markers and filled over the rough ground with smaller ballast and then painted it a desaturated blue (dark blue plus brown).  I included the markers in the painting.

Then I built a sign from Sculpey.  I made two equal height planks and combined them with square tooth pick halves as sign supports.  Painted it the same blue as everything else but wiped most back off to maintain the white some.  Then I painted lettering on the sign in a bright yellow to get some glowing effect from the letters.

Preview with Mr. Bones in place. 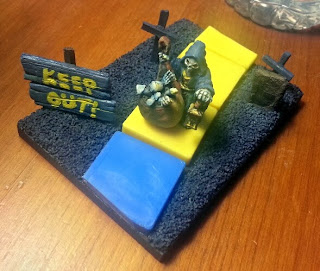 Once I finish the sign work, I’ll glue it to the post a bit off the ground.

I am also considering painting a glow for the yellow game board around it on the ground and a little OSL from the tiles on nearby objects.

Lack of pictures due to lack of battery on my phone during the process.