This is another old mini that has been sitting on the shelf of shame for some time. I removed the integral base. I liked his pose but not where he was looking, so I wanted to have him stalking someone while walking up a set of steps. This brings his sword parallel with the ground and has him looking forward instead of at his feet.

He rested on the shelf primed black with his armor a Phthalo Blue. I cleaned off the dust in preparation to resume work on him. And then cleaned up the black primer with some Reaper Solid Black.

Here he is when I first picked him back up:


After a little clean up, some black paint, a basecoat of his skin with Reaper Red Shadow, and the application of some Squadron Green Putty to flatten off the step’s sides. Which should give it a bit more of a “built” look to the step.
From there I decided that his skin was a bit too dark for what I was looking for, so I went over the Reaper Red Shadow with some Reaper Auburn Shadow. This was much closer to where I had decided to take my Fire Giants’ skin tones.
You can also see in the pics above that the step is more of a single piece with sections to it than three pieces of slate sitting atop one another. Of course this covered up the piece of his integral base that his toes are still attached to on that step. 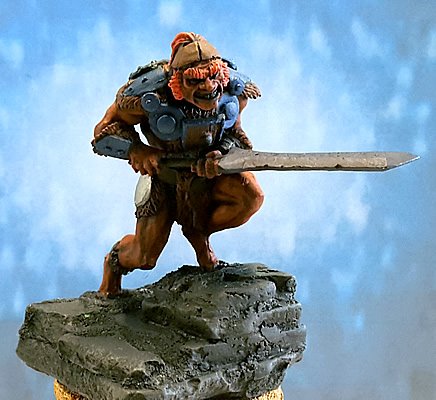 Someone on the Reaper Forums asked for a bit of scale to see how big this giant really is. As you can see below, compared to some other giants available out there, he’s kind of puny but still big enough to be considered a giant.