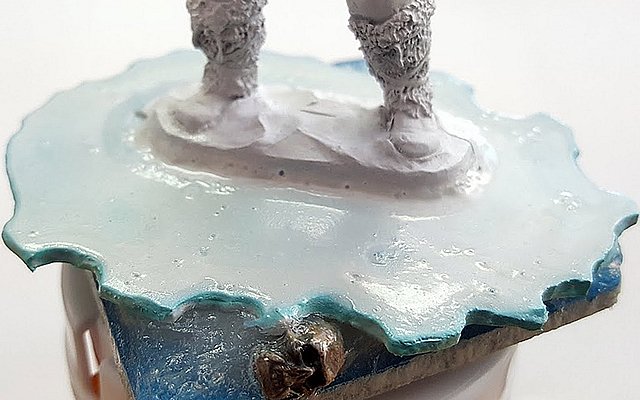 There are a great many times in the course of your hobby life when you might say, "F' IT!" and throw your hands up in the air.  Then maybe walk away in disgust as something that you just spent hours on, days even, devolves into a smoking ruin.  Well, not smoking, hopefully but you get the picture.  Luckily this wasn't mid-project.  No this was mid-delivery to show off a finished project.  One that had been finished for some time and been sitting safely on my shelf at home.

What you see below are before accident pictures of the above mentioned Ral Partha AD&D Frost Giant, 11-436. .  I had painted him up to a nice level some time ago and he's lived through several moves and displays until ...

Well, you can see he even survived his photo shoot.  Unfortunately, he did not survive the fall to the floor in the box with several other large miniatures which I seldom let leave the house.  The miniature itself is undamaged but the previous paint job ... well that had to get remade.  The Frost Giant comes apart at the waist and the shield comes off. Naturally he came apart at the waist and in my heart sunk condition I shelved the whole box and didn't touch it again until recently.

Amusingly, I was rather proud of this paint job back in the day on this classic version of the Frost Giant.

This was really one of my first full basing efforts. I cut the base out of thick clear plastic and then edged it with a rotary tool. Mixed snow, sand painted white and such to cover the large integral base and painted him up.

But after a few years, I got over it, and because he was dinged up fairly well, I dipped him, cleaned him and re-based him at a recent Paint Day.  I made one distinct change in how he was based this time around ... the ice sheet of his old base is now the ice sheet sitting on top of water on top of his new base. 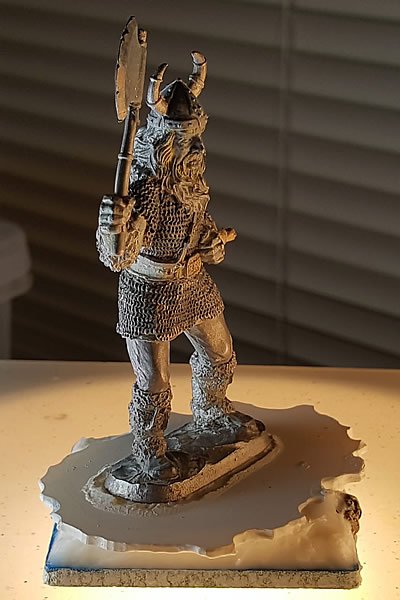 The base is one of the 2-inch tile squares I use a lot with a 1-inch plastic tile holding up the old base: 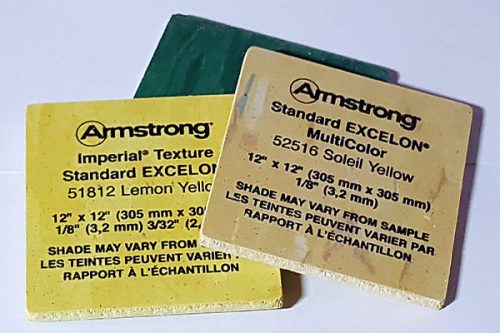 I used Golden Heavy Gel with no coloring as the water between the top and the bottom bases after painting the lower base with an aqua/sea blue I mixed from Warpaint Hydra Blue and Reaper Ultramarine Blue.

I added a skull floating/hanging in the ice/water near the front of the base to add SKULLZ for my buddy over at Ub3r's Ubsession because ... SKULLZ!!  I painted that up on a stick beforehand and used part of the stick to help plant the skull in the gel after I had "cooked" it to set a bit.

Speaking of cooking it. I improvised a low-heat method to "bake" the mini all day after assembly: 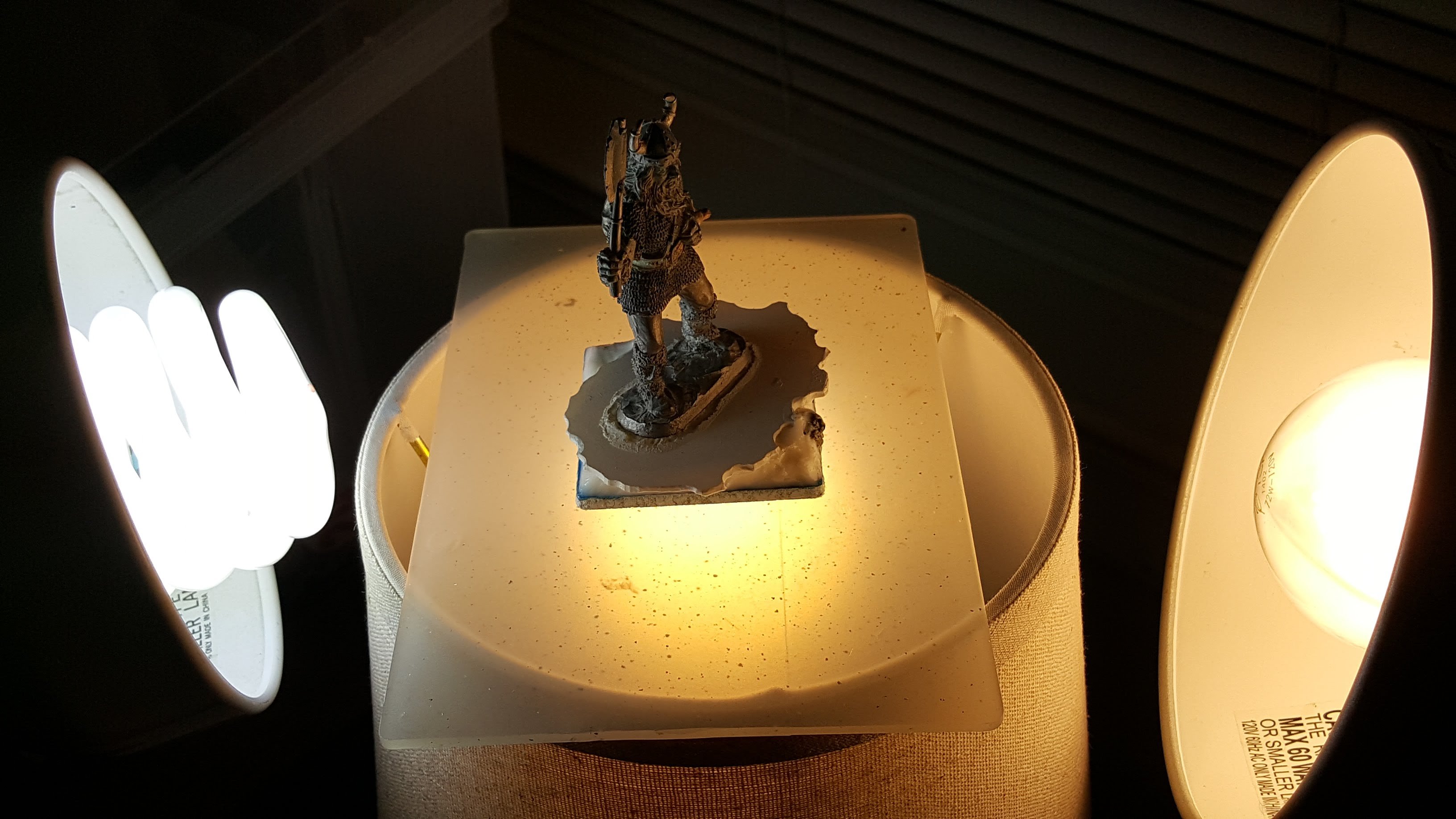 All of the bulbs are energy efficient but still generate a lot of heat using the metal shades and the direct contact of the bulb under him.

Later that night when the gel had contracted a lot, I added more gel to fill the gaps back to the edges of the tile.

A close up of the skull is shown at right.

I also spray primed the giant later that night after masking off the base. The next day I returned to the office to do a little work and paint. So he was placed back on the lamps to resume "baking" the gel.

With the limited amount of surface area available to the air however, the whole thing took a lot longer to set.  Below is a picture of it about two weeks later. 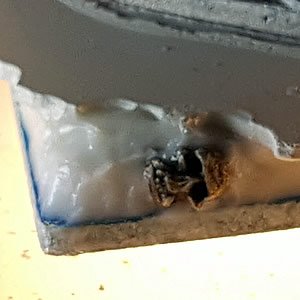 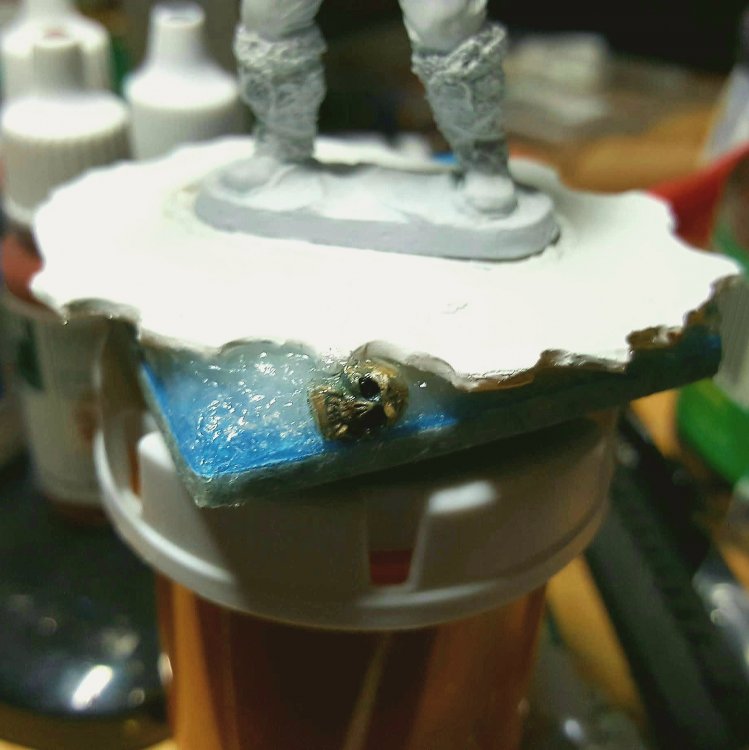 And then about a week later, I picked him back up and started in on the upper section of the base.  I apologize for skipping a couple pictures of the steps.  I was on a roll and forgot to stop.

Here's what's going on above:

Next for my crackle-ice base: