A long time ago, I made a campaign world for D&D called Markshire.  I’ve prolly mentioned it before on here.  It touches a lot of what I do creatively.  In 2005, my friends and I created this campaign world in the game, Neverwinter Nights, as a persistent world and ran adventures from it for some time.

Within that world there exist, in addition to the gods of our mythology, the personification of emotions from the realm, known as Reidlar.  Some are forces for order and some are forces for chaos.  Harrow was the personification of terror; specifically, that of the unknown or unreasonable.  In Markshire, the terrors of living in a city under near constant winter was deafening and a being crept from the darkest corners of the collective terror.

Reidlar were avatars of the dungeon masters for the game.  They were NPCs that weren’t gods, per se, but powerful beings that could be used as tools to spur adventures.  Each DM was tasked with creating this persona for the campaign, so they could add their own twist to the story.  Amusingly, this wasn’t mine.  Mine is my screen name.

Harrow is a scarecrow.  A truly terrifying version.  Reaper Miniatures’ Gauntfield … a perfect name, that I wish our DM had thought of … was a perfect personification of the character.  I bought him a while ago with the idea of placing him behind a tree.

Over time, the tree was built up using excess Green Stuff as I worked on other miniatures and dioramas. The tree trunk I built would be gnarled and dead for many years.  So I started out by applying him to a metal slug for a base and filled the space up to his feet on the slot bottom he had and built the basis for his tree.

As you can see, I used two skewer pieces as the center posts and set the “fork” of the tree I was looking for. Then I placed terrarium rocks around it to fill out the bottom of the trunk.

Over the years I scraped on any excess Kneadite Green Stuff I had from various other projects.

The last bit added was from the effort to add the eye of my Stonehaven Undead Dwarf.  A very tiny amount of Green Stuff.  Which is a little hard to mix and create at that size.  It was smaller than a pin head.   So the remainder went around one of the upright trunks from the tree.

Then after some thought on my efforts to create a bark exterior I decided the whole tree needed some skimming and a little filling of some of the unnatural crevices of Green Stuff.  So I got out my Squadron Green Putty and went to town on the surface of the tree.  I had primed the scarecrow and tree earlier so I just went right over that. 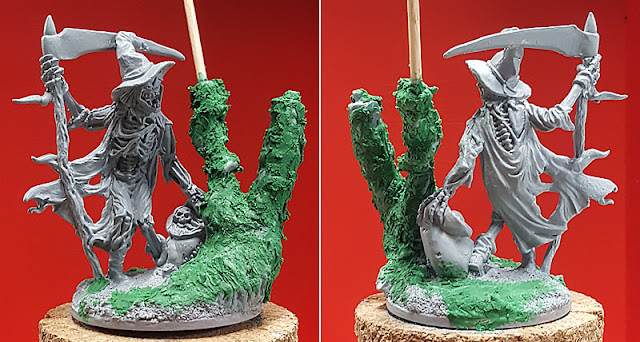 You’ll notice that the bark added is a bit rough.  Once it was dried and set, I could clean it up a bit more.  I liked the appearance of it but I went back in and added some more.

Green Putty is also a great product to smooth over a surface.  So I made some of the sand around the scarecrow smooth with the putty while I was working the tree.

Green Putty dries really quick so within a few minutes I sanded the surface of it with my thumb and a stiff brush.  I have an old toothbrush for this.

So, here’s a second skim of “bark” with the Green Putty.  I cut off the excess bamboo skewers and created a branch collar on each end where the trunks would get overgrown with the bark.

Just below the saddle of the two trunks, I added a third trunk that has broken off and left a branch collar using the Green Putty.

After the Green Putty dried out, I quickly basecoated it with Reaper Walnut Brown.  The primer on the scarecrow, himself, is Reaper Grey Primer.

I think I will be adding leaves at the end to the ground.  Piled around his feet which are somewhat buried in the sand and along the tree base.  Autumn, leaves of course. 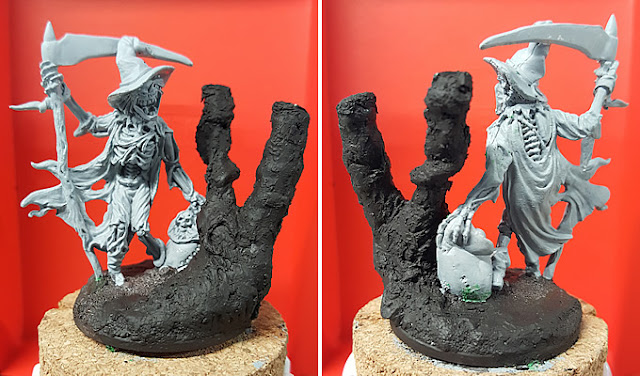 In the game, you could try various doors around the city of Stonemark … yes, a whole city.  If they were locked, there was a small chance you’d be captured by Harrow and sent to his courtyard.  Within the courtyard would spawn ten of his scarecrows … past victims.  Once you defeated the ten scarecrows, a stronger and far more terrifying version of a scarecrow would appear.  A personification of Harrow himself.  If you defeated him, you could leave.  Naturally, there were resources here for the adventurers to find and use so some sought out the master of terror on purpose.

So, I’ll be adding some pumpkins to the base.

Below is simple story about the character and the premise of him within the game.  Stay tuned for the implementation.

Suggestions, comments and critiques are welcome as always.

“Go to sleep, Anna,” said the elderly woman heading toward the door to the cubicle that served as Anna’s room. “You’ll need your rest for tomorrow. We’re off to Stonemark to sell some livestock.”

“But, Nana, I’m not tired,” whined Anna. Of course, her grandmother instantly forgave her for her whining. All 6-year-old girls whine.

“You’ll do as you’re told or in Harrow’s clutches you’ll be.” This amused her grandmother in some strange way but Anna couldn’t fathom why.

“Nana, what’s a hare-row?” excitement entered her voice not fear. This caused some concern to appear on the old woman’s face.

“Anna, dear, you must be careful how you say his name. Saying it like that may bring him all the quicker.” Her grandmother stepped back into the cubicle and settled herself on the floor next to her palette.

This excited Anna as this was grandmother’s storytelling posture.

“Oh dear, I cannot believe my daughter would be so neglectful.” A bit of outrage crept into her voice. “Anna, we live in a strange, and oft times, very scary land. But nothing in Markshire is nearly so strange nor terrifying than…” her voice drops to whisper level “…Harrow.”

Grandmother knew her storytelling skills quite well. She dropped her voice a bit to allow it a darker quality. The darkness of the room deepened as she started her tale.

“A long time ago lived a man alone in a castle. His castle was empty of all save him. No one knows exactly what he did to frighten them all off but no one ever returned. He sits upon a throne of sticks covered with small animal skulls and bird feathers. From there he can hear every whisper of his name.”

“One day, a whisper reached him and then another and he learned that people doubted him. People were no longer afraid of him. This upset him greatly.” The woman’s voice rose in power as she said this. There was no doubt she was in full story mode.

“So he began to search out these whispers, these doubts. With no easy access to the world around him, Harrow used magic to create a portal. It was a portal that opened in the shadows of any door. Then he waited. Waiting until the next doubt came.” The old woman dropped her voice down an octave and the room deepened still further into darkness.

“He heard the whisper finally and he used his portal to visit this person. It was a girl. No older then you, my dear. She was telling her mother that she didn’t believe in him anymore that her mother was telling her this to scare her into sleeping. The mother, of course, told her that he was real and that she had best behave. Content that she had set her daughter straight, the mother left the room, and went back to her embroidery.” Her grandmother made sewing motions with her hands that amused Anna.

“Meanwhile, in the near darkness of her room the little girl sat and waited. Still she doubted her mother. A nearly silent sound caught her attention. She looked up then and an obvious chill ran down her back.” She shivered as she said this to emphasize the little girl’s terror.

“The little girl watched in horror as two gaunt, nearly skeletal hands reached towards her. Behind the hands was a pair of baleful eyes. The eyes were opened to their fullest extent and glowing from the darkness. Just as the hands touched the little girl a flash of bitter darkness enveloped her, and when the little girl could see again, her bed was gone. Her room was missing. She was sitting in a pumpkin patch in the middle of a castle courtyard.” A small bright orange gourd appeared in the old woman’s hand.

“Pumpkins were spread as far as she could see. Among them were trees. The pumpkins rested in the trees, nestled against the main trunk or speared through from the top. Some were even carved open and light shone through from the faces of the pumpkins.” Then grandmother’s voice dropped to a whisper.

“The little girl stood up and walked to the closest patch. As she neared it the topmost pumpkin moved. Then it rose. Attached to the pumpkin was a neck of wood. Dangling below the pumpkin’s head hung some old, slightly small clothing. Feathers stuck out from the collar of the shirt. It stood up completely and towered over the little girl.” A bit of panic crept into the old woman’s voice. Anna’s eyes were wide with fear now.

“It stood there a moment and then out of the corner of her eye, the girl noticed other scarecrows moving towards her at a slow pace.” Grandmother grew silent for a few moments.

Then, “No one ever saw the little girl again.”

The grandmother straightened her posture and put on a smile for Anna. “The tale continues that those that Harrow visits are safe if they are sleeping. He cannot harm you at all if you are truly sleeping.”

The elderly woman paused in the darkened hallway just outside the little girl’s room. She put her back to the door and fell right through it. Fear swept over her like the darkness that enveloped her. When the darkness receded she could barely make out her surroundings. Slowly, as if from a distance, came a sound like clapping. The shadows nearby retreated and a scarecrow stepped forward, it’s hands coming together over and over. Then came the whispered and harsh words, “Well done, granny. Couldn’t have told the story better myself.”