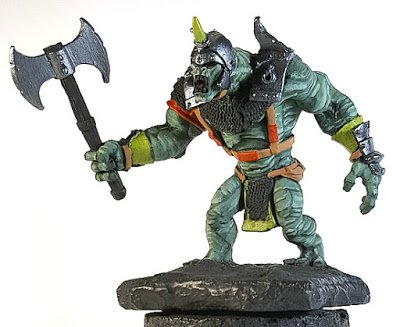 The ball keeps rolling, so next up direct from the shelf of shame is Reaper Miniature’s Mountain Troll, sculpted by Ben Siens, that looks like he escaped from an episode of He-man.  I spent a decent amount of time cleaning the mold offset this guy suffered from … see?

I attacked the previously primed beasty with my regular size metal files.  I managed to get a lot of the mold offset settled but I am fairly certain I couldn’t resolve all of it so it will get painted into the “mini” to look like it belongs or to hide it.

For this guy I plan to use my recently acquired Reaper Moss Triad as his skin tones. If you take a close look at his back in the next pics, you’ll see that his muscles are long and segmented.  They stand out quite nicely.

As I painted the shadow color, Reaper Jungle Moss, I realized that his muscles were laid out along the lines of the Abomination from the Incredible Hulk comics; not the one from the movie.

So after adding the midtone, Reaper Highland Moss, I added the highlight, Reaper Pale Lichen, along the length of the muscles at the bottom to give the impression of lizard scale or segments.

This gave the big guy such a cool look.  From here it’s time to start on the other parts of him.

I decided that I wanted to start with a really dark metal as the basecoat for his armor and weapon so I pulled out Scale 75 Black Metal and applied that.  From there, I did the leather straps, pouch and his fanny pack (on his left hip) in Reaper Griffon Tan.  He has these adjusters on his straps and an arm band around his right bicep.  So I first painted them with the Reaper Griffon Tan and then went over those with another of my latest acquisitions, The Army Painter Warpaints Wrath color from the set, The Army Painter “The Others 7 Sins”.

Then the remaining leather and his horn got a sickly green basecoat of The Army Painter Warpaints Envy from the same set.  This will get covered with some lighter colors up to an off white/light tan … I think.

At this point he kind of looks like the Abomination got community service working a crosswalk for a school with his safety colors. But those should mute a bit as I add more colors to this piece.  I was tempted briefly to paint his axe red and slop paint the letters S.T. and O.P. in white on both sides.

For those wondering, his base will receive some bark to represent rocks and I think a nicely piled set of freshly peeled skulls.  He likes to organize them.