The P-65 Heavy Metal was a remake of Reaper’s original mixture of lead and tin alloy.  This one is 60% lead and 40% tin alloy.  The government banned the use of lead in products and then revised that law to allow adult hobbies to sell it.  Reaper later discontinued the line with the creation of their new medium, Bones plastic.

You can check out the white metal version of this ogre mage if interested or hope they add him to their fourth Bones Kickstarter next year. Watch their Kickstarter account. 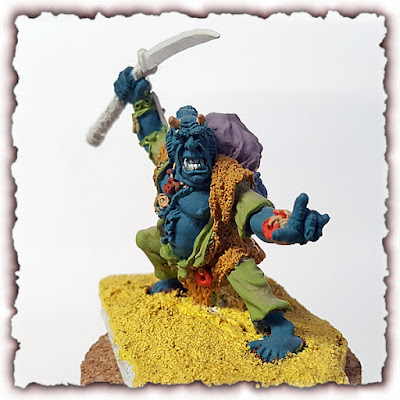 Yeah, the background was boring so I added a border.

As you can see here, he’s just basecoated and attached to a piece of slate which has been covered with ballast.

I basecoated this guy a long time ago and shelved him because … well, I wasn’t ready to completely get into finishing him.

I decided the other night to pull him from the shelf of shame and resume work on him.  I hooked him up to my holder … then had to counter his weight with rocks, sand AND water … he’s a heavy bugger.

I used craft paints at the time to basecoat him.  I am okay with the basecoating and enjoy the palette I started.

The gist of the color scheme was desaturated tones to start with.

I’ve gotten a lot of suggestions to paint a tattoo on his tremendous belly.  Which I have been considering.  I am also interested in doing a face paint of some kind as well.

Got into some shading and alteration of the colors following night. 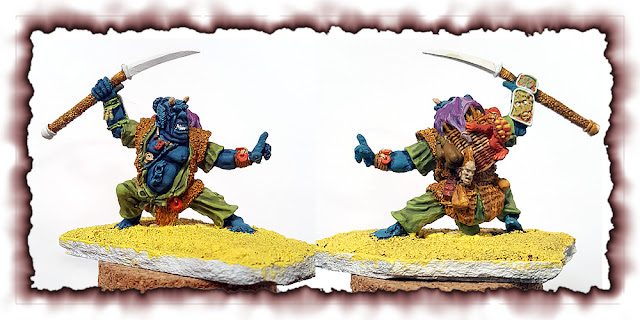 Sticking with the border … WTH.

We’ll see if I can get to more of him before the weekend.