Okay, finally had a chance to pay attention on the Reaper forums and make an entry for a contest.  So, since I want another Mr. Bones based on the new Bones II Kickstarter character I decided to make my own version.  So the original Mr. Bones lost his shovel and stopped pointing at people.  Now he’s holding a lantern … from the Undertaker … and a large modeled treat bag.

Here’s the modded and based Mr. Bones II: 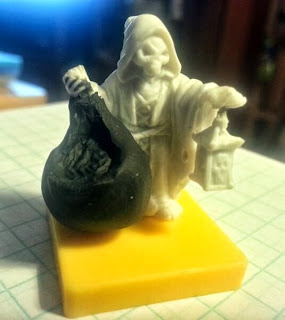 I had to add some green stuff once I baked the bag and glued it in place.

After the gang on Reaper mentioned I could sacrifice a Bones skeleton to fill the bag instead of making some bones from green stuff.

So here he is with the gaps filled and some bones in the bag: 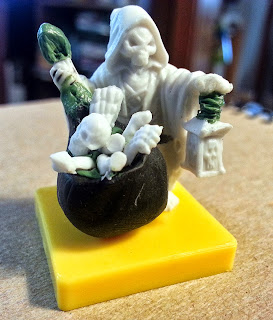 More to come when his green stuff cures.