Eando Kline from Reaper Miniatures is a great passive posed miniature.  He is loaded for a full adventure be it a dungeon delve or a trip to a lost temple.  With so many details it was hard to figure out where to begin.

First, this is a Bones miniature so the removal of lines, etc. is a bit a pain in the ass. So you’ll notice that the removal is half-hearted.  No worries, though.  He’s really just meant for the table top for any of my players or myself.

Let’s get to the pictures! 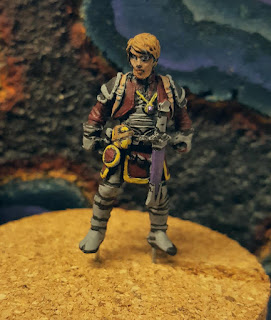 Here he is attached to his pins.  I removed his integral base months ago while waiting for something else to do and to demonstrate it for someone at Paint Day.  He’s primed gray and lined with Reaper Walnut Brown.

Here’s a shot of Eando finished but now pinned to a resin base.

Originally I was going to do Vallejo Neutral Grey on the block, some green for the Scroll Work and a White Sandstone color for the Lion statue head.  I plan to add some ground foam for moss to age the scene a bit more.

But after I picked him up again, I re-evaluated my colors a bit and listening to that little voice in my head named, “Cash Wiley,” I decided to echo the character’s colors in the floor.

I used Reaper Grey Primer on the whole base.  From there, I used Vallejo Panzer Aces Stencil for the basecoat on the lion head.  Then I went over the filigree on the main flat area with Reaper Palomino Gold.  Once that was covered, I went in and striped the circular chevron pattern in the flat surface with the Stencil.  I then washed the whole flat surface with Reaper Spattered Crimson … a slightly darker version of the Crimson I used on Eando’s jacket. 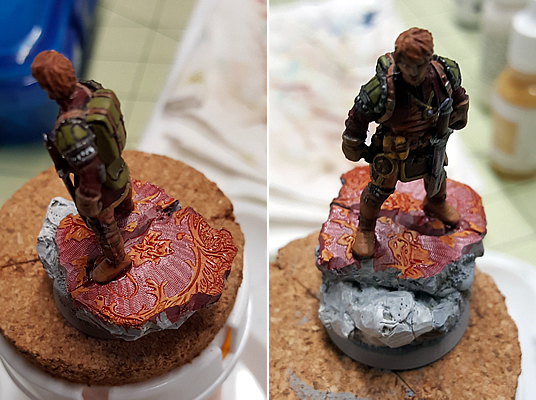 Next, I will go back over the filigree and drybrush some more Palomino Gold to bring the color back up.  The idea will be to go over that with some version of gold metallic.  I will apply some gloss coating the flat surface to give it a sheen.

The underside of the flat surface will get some varying levels of umber and earth tones.

Once all that is finished, I will add some layering effects to the lion head to give it a different stone look and finish it with a glossy coat to give it a sheen as well.

There are some “vines” and roots showing so I will paint those accordingly and then add some creeping moss using ground foam in black and green.

Stay tuned for the finished piece.