I know it’s been a while since I last updated my Work In Progress titled “Altar of Blood.”  First, the poured rock wall pedestal for the altar was my first time working with Dental Stone and it took forever for it to set completely.  I stashed it next to my dehumidifier and left it there for some time.  And even then the top 1/16th of an inch never really set and I ended up scraping it off the piece.

So here it is, UPDATE:

Earlier this week I actually disassembled the pit wall portion or as it’s become known, “the pink piece of cake.”  The second pour was never truly attached to the bottom pour.  So the top half inch was separate.  And amusingly after finally curing through the piece, the two support poles I put in came loose.

I refer you to my old picture shortly after the pour and mold removal: 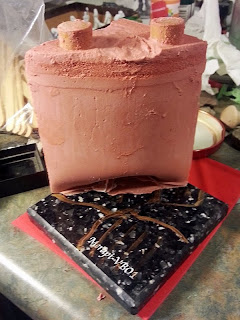 And during curing cracks appeared on the back of each side running from top-to-bottom right along the poles.  Sadly I don’t have pictures of them prior to another phase of work so you’ll have to wait a moment to see what I mean.

I then proceeded with cleaning up the piece.  Well, after agonizing for a bit about the condition of the piece and whether I should re-cast it.  However, I decided that it was worth saving at this point.  So out came the super glue.  First, I removed the detached top pieces of the pit wall. They came away in three pieces, the two corners and the main interior.

Before moving on, I wanted to ensure that the lower portion didn’t lose the same corners and ran glue into the cracks along the poles and let that set.  During this process I noticed that the poles were loose in their holes, so I removed them, ran super glue along the same cracks on the inside and then reinserted the poles.

After letting the poles set for some time, I glued the top layer back in.  The other reason for the delay in production of this diorama was evident.  The two nubs of the poles were intimidating me.  I knew that if I attempted to saw them flat I’d probably crush the whole structure.  But then after talking about it with a buddy of mine for a bit, I decided to use polymer clay and epoxy putty to bridge that gap.

But first, I needed to clean up the piece and sculpted the face of the pit to be more rock wall like.  So using some scraping tools and a chisel, I scored and roughed up the smooth pot-bellied surface and then to avoid everything coming apart and to ensure that face wouldn’t take paint better, I glazed the entire piece with some brush on matte varnish.

Then after that was long dry, I applied some polymer clay to the top, essentially frosting the cake piece.  Like so…

The green stuff on the right was applied to complete the attachment of the pin there and to bolster the point where the shale rock will connect on that side.  You’ll see in a moment what I mean.

Below you’ll see the outside faces of the piece and can see where I welded the cracks shut with super glue and how I measured my pin mark for the opposite corner where the shale actually completely overlaps the support.  You can see that I roughed up the clay so the green stuff would have greater surface area to adhere to. 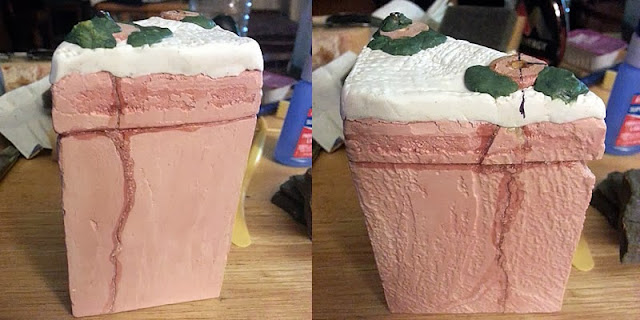 A close up of the pin/green stuff corner: 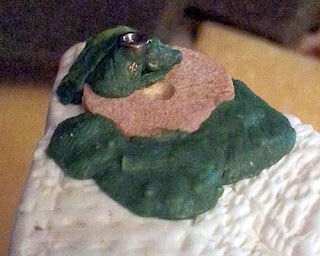 I pinned the lowest section of shale by using a masonry bit to bore a hole into the shale and used a heavy finishing nail for the pin. 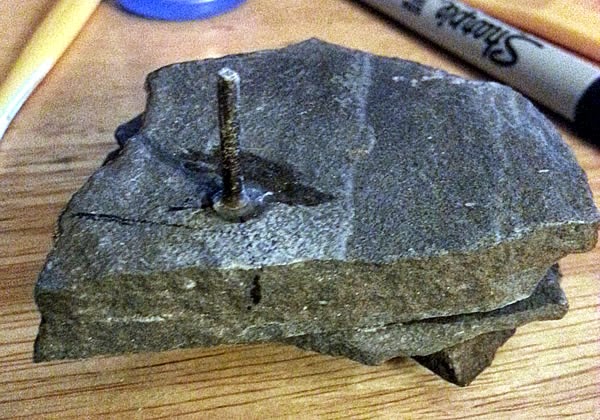 Then after applying some epoxy putty to finish the gaps between my white layer and the shale and to help bond the two together, I applied super glue to the support poles and set in the shale.  The non-pinned side rested against the support pole and pin/green stuff I set earlier. 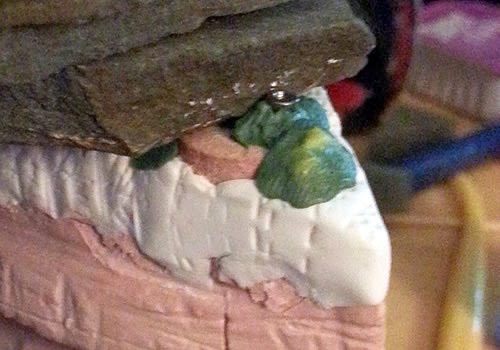 Then I proceeded fill the gap around the outside of the shale/layered cake with green stuff and finish connecting the two pieces together completely. 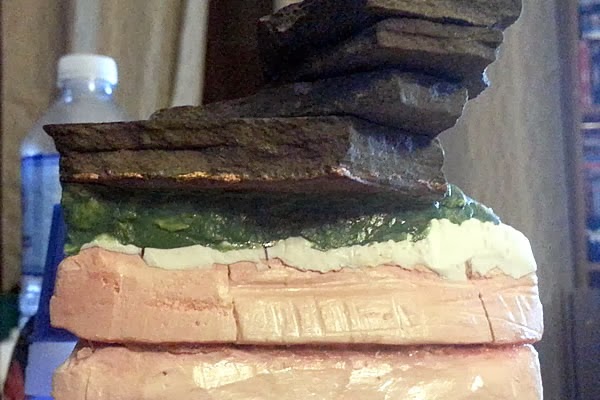 Apparently, I only took a picture of the front.  I used another rock to get a more natural finish to the putty.  I’ll be adding smaller pieces to the right side to bring the shale up to the top a bit but I plan to offset the new pieces so they look like a small crevice.

So moving forward, I will finish the attachment of the shale, then I’ll most likely prime it with some Krylon black and I think then I will attach it to the first base plate for stability standing and something to hold on to that isn’t getting painted.